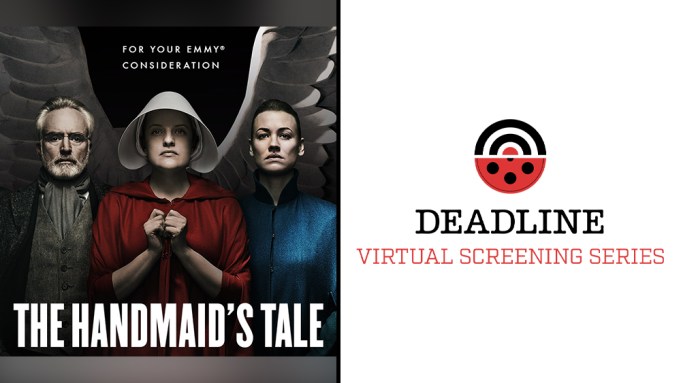 “I think a lot of the things that Bruce, the writers’ room and I are dealing with is the concept of what it actually means to be a leader and if you were somebody who was not born for the job,” declared The Handmaid’s Tale’s Elisabeth Moss of the primary theme and consequence of the Emmy winning series’ tumultuous third season.

“I think what makes our show sort of different from other shows is that it is a personal drama,” the actor and executive producer of the Hulu series based on Margaret Atwood’s acclaimed dystopian novel adds. “So I think, at the same time, she’s dealing with this feeling that I’m just a Mom, I’m just women, I’m just a wife, I’m a daughter, a sister, a friend and how do I save the world?” Moss notes of her June character and the pivotal role she has taken this past season in the Mayday resistance movement against totalitarian and theonomic government of Gilead

Past Outstanding Lead Actress in a Drama Series Emmy winner Moss joined a Deadline Virtual House screening and panel for the “Mayday” Season 3 finale of The Handmaid’s Tale earlier this week. Along with Moss, fellow cast members Yvonne Strahovski (Serena Joy) Ann Dowd (Aunt Lydia) and Bradley Whitford (Commander Lawrence) participated with EPs Bruce Miller and Warren Littlefield in the discussion we called “Cast and Creators in Conversation on When Dystopia Meets Reality” – as you can see in the video above

Originally launched on the Disney-controlled streamer back on August 14 last year, the showrunner Miller penned and Mike Barker directed Mayday brought together many of the threads of a season that both revealed and shook Gilead to its repressive core. Of course, in classic TV tradition, Season 3 also ended in a cliffhanger that found Moss’ June shot as she helped 52 children escape to Canada.

With sturdy ties to the real-life America of today, the panel video above lays out the roadmap of how the cast and creators got to that bloody moment in the snow. Additionally, to tread further on that fascinating path, check out our previous Handmaid’s Tale Crafts Masterclass from June 25 with the show’s producer designer Elisabeth Williams, costume designer Natalie Bronfman, director of photography Colin Watkinson, and composer Adam Taylor, plus Miller and Littlefield.

The Handmaid’s Tale will be back for a fourth season next year on Hulu.