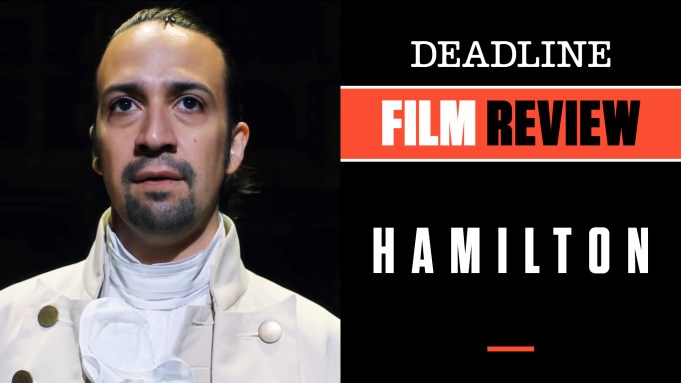 Considering the worldwide phenomenon that Hamilton has become since its 2015 Broadway debut, it didn’t seem all that crazy to me when Deadline announced that Disney had paid $75 million for theatrical rights to the filmed version of the stage musical and that it would be a major release in theaters next year. However, with the coronavirus pandemic wreaking havoc everywhere, creator Lin-Manuel Miranda and Disney’s decision to instead release it for the Fourth of July weekend on the new streamer Disney+ not only is likely to set off a stampede to subscribe to the service, it also is truly a gift.

In fact, with so much of the country shutting down beaches, outlawing fireworks, and reimposing stay-at-home orders, Hamilton is perhaps the reason to celebrate the holiday this year. When the original purchase deal was made, no one could have known that Broadway, and everywhere else in the world the show is playing, would be shut down for months (now at least into 2021) so this record of the show’s first wave not only keeps this remarkable musical achievement alive, it notches another amazing milestone in the journey for the unlikely hip hop version of the life of Alexander Hamilton.

Miranda and the powers-that-be behind the show, including director Thomas Kail, made the smart decision to create a filmed record of the original cast of the 11-time Tony and Pulitzer Prize winner. Shot on Broadway over a three-day period in late June 2016, Hamilton utilizes six cameras in front of live audiences, as well as some special Steadicam work that was shot between the live performances of 13 of the 40+ musical numbers. This is about as good as it gets in terms of turning the stage experience into a movie experience. Yes, it is still a filmed stage show, but Kail has managed to keep the energy and excitement intact, while making it a much more intimate affair.

I was lucky enough to score orchestra tickets to see it at the Richard Rodgers Theatre just a little more than a month before they filmed it there. While the state of hysteria and anticipation in the audience is not attempted to be re-created here (how could it be?), the show itself is once again a revelation. As they say, this landmark theatrical marvel of non-traditional casting is a “story of America then, told by America now” with an ensemble of Black, brown, Asian and white performers presenting history as viewed from an Obama era that now seems blessedly optimistic, heartening, and hopeful in light of the polarized and divisive environment the country has become. If anything could possibly bring us together, it is this stirring entertainment. A hip-hop musical about Alexander Hamilton? Imagine that.

Right from the beginning, after introductions preceding it from Miranda and Kail explaining their desire to make this show available on a mass level, you really do realize what an extraordinary work it is. I can’t recall anything, even from the likes of Sondheim or Rodgers and Hammerstein, that has such a continuous string of iconic musical numbers right from the word go: “Alexander Hamilton,” “My Shot,” “The Story Of Tonight,” “The Schuyler Sisters,” “You’ll Be Back,” “Helpless,” and the sublime “Satisfied” sung to perfection by Tony winner Renee Elise Goldsberry. And that’s just the first part of the first act! “The Room Where It Happens,” “One Last Time,” and perhaps the show’s most poignant and beautifully sad song, “It’s Quiet Uptown” are among many still to come. The latter melancholic number that reunites Hamilton and his wife Eliza over an immense personal tragedy is heartbreaking, and so much more personal it seems after seeing it performed up close.

I have seen plenty of filmed versions of stage shows before (James Whitmore even got a Best Actor Oscar nom for his one man show Give ‘Em Hell Harry), but clearly Kail, who so brilliantly directed the Emmy winning Grease Live! for Fox, knows how to use new technology and film techniques to make this production shine in becoming a permanent record of a glorious work. Miranda as Hamilton, Leslie Odom Jr. (another Tony winner here) as his arch rival Aaron Burr, a towering Christopher Jackson as George Washington, Phillipa Soo stunning as Eliza Hamilton, and the dazzling abilities of Daveed Diggs, yet another Tony winner as Marquis de Lafayette/Thomas Jefferson, manage to deliver one show stopper after another. And then there’s Jonathan Groff’s hilarious and wickedly pointed King George with every comic expression so clear it is like standing there onstage right next to him. Lines I missed are suddenly brand new in this setting.

Someday I would love to see a film adaptation of this, and no doubt it will come (Miranda’s In The Heights is already in the can for its COVID-delayed release next summer, and his Tick, Tick…Boom has been shot for Netflix as a movie). However there is something about a work of art finding its true place in time, and that ironically is this epic story of a man, an orphaned immigrant, who was not going to “throw away his shot,” who was there at the birth of the United States of America, that needs to be discovered and rediscovered right now by a country in turmoil, in protest, and in action at a crucial moment when we also are not going to throw away our shot. It is indeed a gift.

Hamilton starts streaming on Disney + on Friday. Check out my video review at the link above with scenes from the film.

Do you plan to see Hamilton? Let us know what you think.