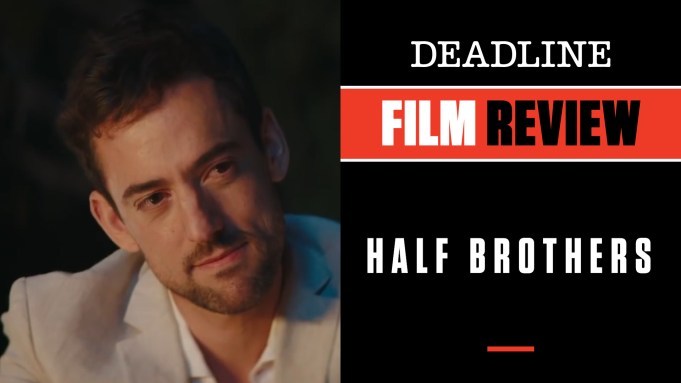 At times threatening to be completely overrun by its tendency to take the comedy very broad, the new Focus Features release Half Brothers, which aims to appeal not only to Latino markets but also possible crossover family audiences, is rescued by talented actors in the title roles as well as a great big dose of genuine heart that carries the day.

This is the kind of movie that relies mightily on the ultimate chemistry of its leads playing half brothers on opposite ends of the spectrum, literally and otherwise. Half Brothers opens in Mexico showing the loving relationship between young Renato (Ian Inago) and his father Flavio (Juan Pablo Espinosa) as they fly model airplanes together, a real passion for the child. But hard times south of the border fall on Dad, and he decides to trek to America in search of work in order to support his family, promising Renato he will be back.

That didn’t happen, as we cut to 25 years later where Renato (now Luis Gerardo Méndez, also an Executive Producer) is a successful businessman for a charter airplane company who gets word that his long-estranged father is dying and wants to see him in Chicago. Reluctant to go, he is finally convinced by his fiancée Pamela (Pia Watson), whom he is scheduled to wed in just four days, that he has to find closure with his own father before they can be any semblance of a new family with her own son.

Once in Chicago he discovers he has an American half-brother named Asher (Connor Del Rio) he never knew about. Asher is the polar opposite, a high-energy, high-strung kind of guy eager for connection. As a last wish their mutual father hands them a map for a cross-country trip, mimicking his own journey in America a quarter century earlier, and makes them take off on the road trip from hell — at least from the POV of stuffed shirt Renato. The end game is a convent in El Paso and a person named Eloise, but in between they hit a St. Louis factory, a Latino beer hall, an Oklahoma pawn shop (with a cameo here from Vincent Spano), a Route 66 diner, a hunting cabin,  an ICE detention center and more. There is even a stop where Asher kidnaps a goat that becomes a third wheel on the journey and which he names Senor Renalito after his newfound familial connection.

The gist of the whole thing, from a script co-written by writer-producer Eduardo Cisneros, is to bring this mismatched pair to some kind of middle and shared humanity. It may be predictable, but amidst the broad attempts at hit-and-miss humor, as well as the slapstick moments, the pair grows on you, and the frenetic but lively direction by Luke Greenfield (Let’s Be Cops) help make this film a heart-warmer.

Méndez is the straight man here but never goes over the top, constantly playing his frustration until eventually finding some empathy from the audience. Del Rio is a go-for-broke comic actor here, sometimes just plain annoying but winning us over by his sheer zest for life. The goat doesn’t hurt matters at all, ludicrous as his entrance becomes; I say thank god for that goat. Subtlety is not the word for most of these shenanigans, but you may indeed find yourself rooting for these half-brothers by the time their adventure crosses the finish line.

Check out my video review above with scenes from the film. Do you plan to see Half Brothers? Let us know what you think.