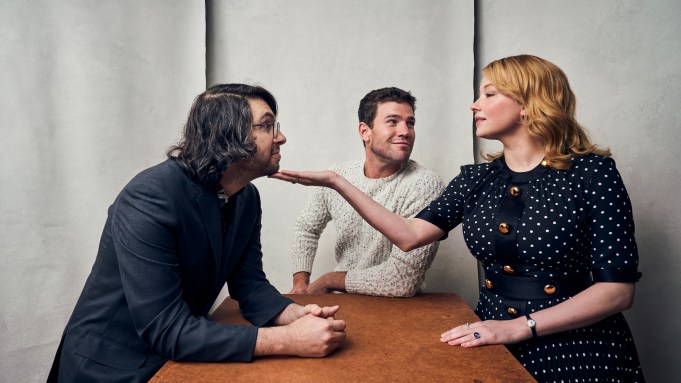 Carlos Mirabella-Davis’s thriller Swallow follows a current day upper middle class housewife, Hunter, who lives on the Hudson River in a glass house and learns that she’s pregnant. But there’s a catch: She’s not all that happy with her marriage to posh husband Richie. So unhappy that Hunter begins to swallow objects, an eating disorder known as Pica.

Swallow, which counts Joe Wright as one of its executive producer, is not a horror film, rather a drama which doubles as a thriller.

Mirabella-Davis counts as one of the primary inspirations for the film, “My grandmother, Editha Mirabella, who was a homemaker in the 50s. She developed rituals of control, obsessive handwashing to cope with an unhappy marriage and was eventually institutionalized by her husband.”

The filmmaker also says “my own rituals of control and OCD behaviors” were an influence. “Dealing with anxiety on a day to day basis, there’s so much chaos that happens around us in the world. I wanted to write a complex, interesting character that was navigating a universe of oppressions, a paradigm in patriarchal world, who started to rebel from these private rituals, that then exploded to an all-out rebellion.”

Tonight Haley Bennett won the Best Actress award at the Tribeca Festival for her portrayal of Hunter, which the jury called  “sensitive and engaging.”

“I was interested in the duality of the character; there’s a side of her that knows what is happening is wrong — but she’s masking that,” says Bennett.

Here are remaining showtimes for Swallow at Tribeca.