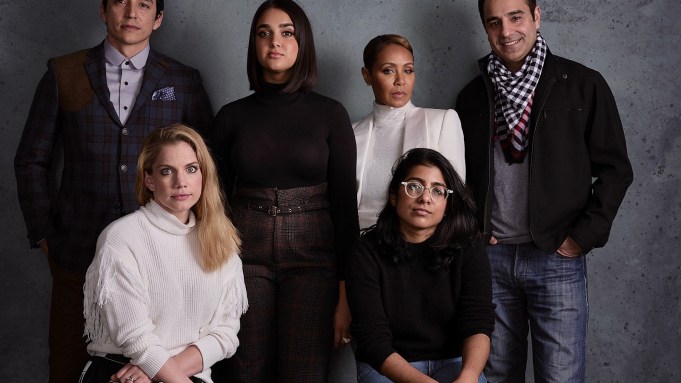 The second feature from writer/director Minhal Baig, Hala was a passion project, emerging from the director’s experiences growing up in Chicago. The daughter of immigrants, Baig is a first-generation, American-born artist whose film centers on a pivotal moment in her past—”this moment…in my senior year in high school, where the most significant change was that relationship with my parents and my family.”

Executive produced by Jada Pinkett Smith, the feature allowed Baig to document her own experience retroactively, putting her perspective into Hala (Geraldine Visnawathan). While the project emerged from Baig’s 2016 short of the same name—the first short she ever made—she always had her eyes on the feature-length story, writing the short “as a subplot.”

“It’s this romantic relationship that’s happening with Hala and Jesse [played in the feature by Jack Kilmer], and the script evolved from that and became much more about the family, a family that’s wrestling with a lot of things,” the director said, appearing yesterday at Deadline’s Sundance Studio. “[Hala]’s first-generation, but she’s also expected to carry on some of [her parents’] culture and faith.”

A person “with her own ideas and her own agency,” [who] is “forming her own identity,” Hala is Pakistani-American, but that label does not define her.

Taking on the role of Hala, Visnawathan was grabbed immediately by the “authenticity” she found in the script, and by the voice of its author, which leaped off the page. Like Visnawathan, co-star Azad Khan found the film utterly universal, a work of art that should resonate with a broad audience.

“The best part of the film that I like is that if you have a kid [at an] adolescent’s age, you will see the coming-of-age part; if you’re an immigrant, a Muslin immigrant, or [of] any other religion, you will see that part also. Coming from a culture and now trying to fit into another culture, you can see that,” he said. “So, it is going to strike a chord with everybody watching the film.”

As an executive producer, Pinkett Smith has found a lot of satisfaction in elevating “beautiful talents like Min, who can just need help to get their art made.”

“Having the ability to help people who might not necessarily have that opportunity, that might have a bit more difficulty getting their stories made in Hollywood, that always brings me a lot of joy,” the EP said. “The fact that this is her [second] film that is here at Sundance is amazing.”

To take a look at our conversation with the director, EP and stars of Hala—including Veep‘s Anna Chlumsky and Gabriel Luna—click above.