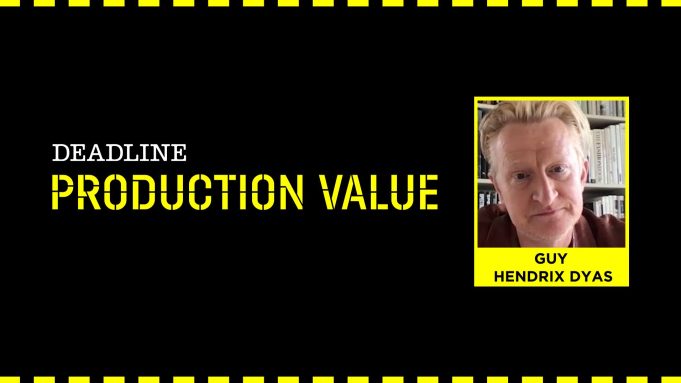 As Pablo Larraín’s production designer on Spencer, Guy Hendrix Dyas relished the chance to put standard biopic storytelling aside, tapping deeply into the psychology of an iconic royal.

“What he presented, and what I knew one of his brilliant talents was, was exploring somebody’s personality, and seeing the world from their perspective,” Dyas says in today’s installment of Production Value. “He’s extremely clever at showing really what somebody’s going through.”

The impressionistic drama from Neon and Topic Studios finds Diana, Princess of Wales (Kristen Stewart) struggling to endure the Christmas holidays with the royal family at their Sandringham estate in Norfolk, England, watching as she decides to end her decade-long marriage to Prince Charles (Jack Farthing), while grappling with mental health problems.

Dyas came to the project after collaborating with Larraín on Lisey’s Story, an “expansive” Apple series based on Stephen King’s 2006 novel of the same name, which gave the pair an opportunity to “find an incredible synergy.”

With his Sandringham sets for Spencer, the designer looked to do “a very tricky thing”—evoking the sense of “an elegant prison” by infusing a world of “opulence…and luxury” with “an underlying discomfort and ugliness.” Indeed, the film’s visuals would closely mirror Diana’s emotional experience—spotlighting the way in which this “wonderful human being” raised in the “idyllic” countryside of Norfolk was groomed for a world at odds with her nature, which limited her ability to express herself.

In practical terms, the estate was “an absolute jigsaw puzzle” to create, with 90% of the film shot in Germany. A key location serving as its exterior was a university called Nordkirchen Castle—”a big, austere, symmetrical building set within a moat,” which he says embodied “this very specific English architecture” he was looking for. Another key real-world site, serving as home base for interior scenes, was the Frankfurt-adjacent Hotel Kronberg, which “below the layers and layers of overdecoration and dusty old hotel carpets” had “all the correct wood and floor details” that would lead you to believe you were in the UK.

Much of the detail work he’d bring to his recreation of Sandringham was inspired by elements found within Steven Knight’s script—including the “rather eccentric…machine,” with which members of the royal family weigh themselves before and after Christmas dinner, per tradition. Other nuances of royal life informing his designs, he had to discover for himself. “The way the tables are laid, the seating arrangements, the order of who is supposed to eat first and second and third, and all these very, very important traditions…all of these were gathered,” says Dyas. “We kept enormous dossiers…that were there for us to look at and reference every time we were designing a set, so that we could get all of those details correct. And although I wouldn’t say that our sets are even supposed to be a complete facsimile of Sandringham, certainly the essence, if you like, of those sets is correct.”

While stretching the art department budget and filming during Covid were two principal challenges for Dyas on Spencer, dealing with food was another. He was supported in making arrangements for “extraordinary” dinner scenes, calling for an edible pearl necklace and nettle soup in the perfectly revolting shade of green, by “two wonderful food stylists” and “a permanent science experiment lab” launched during pre-production.

“Outside all of our sets at any given time was literally a complete portable kitchen of people stirring soup and creating fresh croutons,” the production designer reveals. “All this stuff was going on behind the scenes, just behind the walls of the set or in the corridors of the locations.”

Posing another immense and unusual challenge was a “climactic scene” involving the shooting of pheasants. While no birds were actually harmed during filming, the production would need to create its own “breeding farm” for the 600 or so released into a German forest—given the fact that filming was taking place outside of the hunting season for which they are generally bred. “We often make jokes about it,” says Dyas, “and realize that we’ve started a whole community of pheasants in this forest where there have never been pheasants before.”

A two-time Oscar nominee, Dyas is someone whose career found him. He grew up on a farm and was first drawn to the magic of design by filmmakers including Ray Harryhausen, who sparked his imagination with his assortment of “claymation monsters.” After attending the Chelsea School of Art in London, he moved on to the to the Royal College of Art, where he threw himself into “every form of creativity.”

Upon graduating in the early ’90s, he had his pick of jobs and chose to work for Sony, designing products for the company including Walkmans and Discmans. “At the time, I suppose you could argue, [that] would have been the equivalent of being offered a job by Apple in their design department. So, I jumped at the chance and spent three years in Tokyo, absorbing the extraordinary city,” he recalls. “I had a motorcycle and traveled around the country, looking at the beautiful countryside, the use of bamboo. It was incredibly influential, and for somebody who really never thought they were going to leave the farm in the south of Devon, to find yourself in the Far East, spinning around on a motorcycle in Hokkaido and all these incredible places, it was quite something.”

While spending his days at Sony, Dyas would spend his evenings and weekends pursuing “free-form creation”—”this kind of weird fantasy art and model building, which [he] really didn’t have a name for.” He’d come to be offered a job at ILM after a curator came upon his work at an exhibition in Tokyo, and the three years he spent at this storied company would become his film school. “ILM was incredible. I loved every second of it,” he says. “I was a visual effects art director—that was my day job on films like Twister—and even got to hang around some of the model shoots, and held cameras and smoke machines, and did a little bit of everything.”

From there, he would hit on multiple big breaks, in establishing himself as a production designer. It was on Twister, which marked his first feature as a VFX art director, that he first got to explore “the influence” he could have on the creation of a film. Later, as a concept designer and assistant art director under production designer Tom Foden on genre-bender The Cell, he was given “free reign to create a bizarre world,” continuing to expand on the base of knowledge which now informs his process.

Then, there was Dyas’ first production design job on X2: X-Men United. “That was an incredible opportunity and quite unusual at that time, to be given the opportunity to design such an important studio tentpole out of nowhere, really,” he notes. “I mean, I had a handful of art director credits, but I was mainly known in town for illustrating and concept designing by that point.”

What Dyas loves about the work he does is that no two experiences in production are the same, and that there’s never a shortage of great projects to work on. “I’ve tried desperately to be varied, and I find that the experiences of all these films do play into each other, which is lovely,” he says. “You can bring things that you’ve learned from X-Men 2 into Inception, or Elizabeth: The Golden Age. You know, it really doesn’t matter. They all feed into each other. So, I love the variation of the job and the challenges.”

Spencer made its world premiere at the 2021 Venice Film Festival and hit U.S. theaters in November. Check out our entire conversation with Dyas above.