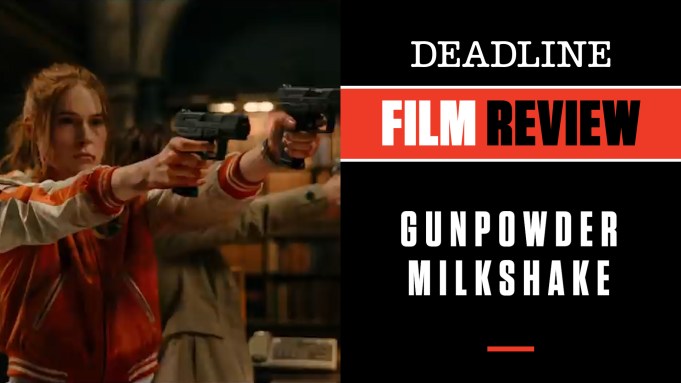 The times they are a-changin’.

In a genre ruled by men for decades, it is clearly now the ladies’ turn to provide the action. With Black Widow leading the summer box office — the first Marvel stand-alone since Captain Marvel, both featuring female stars — plus a steady diet of movies like Atomic Blonde featuring women in kickass roles previously owned by macho actors, the trend is clear: Hollywood is changing its tune. In fact, in the latest Netflix entry into the genre, Gunpowder Milkshake, the only characters written above one dimension are the women, and they rock in this.

Karen Gillan’s Sam is central to the plot, an assassin brought up in the culture of The Firm, a criminal syndicate which took her under its wing when she was abandoned at age 12 by her mother Scarlet (Lena Headey), who herself had fled the clutches of The Firm. Fifteen years later, Sam carries out hit jobs under its tutelage. When she kills the father of young 8 — and 3/4, as she likes to say — Emily (Chloe Coleman), Sam takes on great self-guilt and makes it her mission to prevent The Firm from getting its grip on her (the father stole from some stuff they desperately wanted).

In one of many action set pieces in the film from Israeli director Navot Papushado, Sam takes Emily back and begins grooming her as part of the force of women known as the Librarians, who provide a haven as she finds herself now with a target on her back. Headquartered in a library specializing in great female authors, Anna May (Angela Bassett), Florence (Michelle Yeoh), and Madeleine (Carla Gugino) make up the powerhouse trio who run things, all clearly with a history of guns and violent activities on their own.

Sam’s mother Scarlet, also was a member until she abandoned them as well, comes back into the picture in hopes of righting several wrongs she did all those years ago with her daughter. The books from the likes of Virginia Woolf and Jane Austen in this library not only impart knowledge, they also act as a hiding place for guns and money, and the library later becomes a setting for one of the best action scenes in the flick, with hordes of bad guys armed to the teeth and aiming to do in Sam and her female counterparts.

Before we get to that, Sam has an encounter with a trio she describes as the Three Stooges (except they make Moe, Larry and Curly look like Nobel laureates by comparison), in a cartoonish showdown in a dental facility run by a guy clearly on the take. His solution is to inject Sam with a serum that instantly paralyzes her arms, making things difficult, to say the least. This leads to a battle between one woman with no arms versus three burly men with guns. Using her legs like an exquisite martial artist and knocking them out one by one until employing a giant molar to smash in the head of their leader, that is only the beginning. I have to say it is very cleverly choreographed as far as these things go. There is much more including an unforgettable driving lesson in a parking garage that the still-arms-challenged Sam gives to Emily in order to escape another group of male hunters out to stop them.

Ultimately, it all leads back to Nathan (Paul Giamatti), who answers to higher-ups in The Firm but actually has guided and helped both Sam and Scarlet in the past. He’s not your typical villain but rather a guy stuck between a rock and a hard place who simply has to call out the dogs on one of his prize pupils.

As absurdly ridiculous as it all is, and extremely violent, there is fun to be had here because of a terrific cast having a blast. With stars Gillan, Bassett, Headey and Yeoh — who has a great scene involving chains — all having strong action cred of their own, the film never slows down for a pit stop. Particularly fun is a huge blowout at the diner, which opens the proceedings and then provides a closing punch in which all the stars get to strut their stuff amidst the milkshakes very much front and center with all that gunpowder flying around. Gillan is particularly appealing, and her relationships with Heady and with Coleman are nicely played out.

The script comes from Papushado and Ehud Lauski. Producers are Andrew Rona and Alex Heineman. Netflix begins streaming it on Wednesday and it will also have a theatrical run. Studio Canal will be putting  it theatres internationally. Check out my video review with scenes from the movie at the link above.

Do you plan to see Gunpowder Milkshake? Let us know what you think.