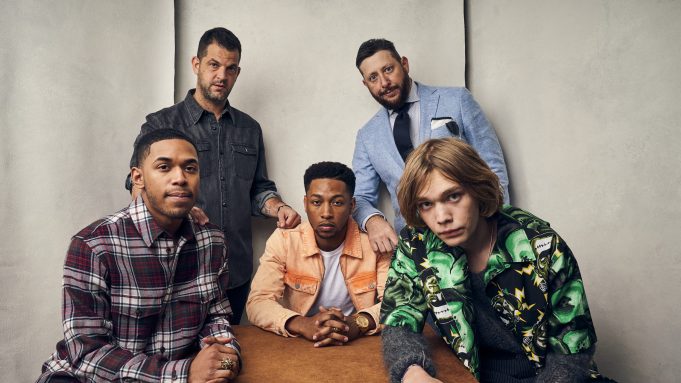 One of the most prominent music video directors of the last 14 years, Nabil Elderkin collaborated with the likes of Travis Scott, SZA, Kendrick Lamar, Vince Staples, John Legend, and Kanye West before coming to Gully, the project with which he’d make his feature debut.

In the dystopian drama, written by Marcus J. Guillory, Kelvin Harrison Jr., Charlie Plummer and Jacob Latimore star as three friends who have survived extreme childhoods, running amok and causing trouble in LA, as they try to find their footing in life.

Elderkin’s journey with Gully began five years ago, when he was approached with a script by producer Alex Georgiou. “Something about it just captured me. It brought back a lot of feelings of things that I’ve seen from afar,” the director told Deadline, in conversation with his cast. “I made a phone call right after that saying, ‘This needs to be my first film.’”

For its stars, Gully was a challenging project, tackling tough subject matter. On reading the script, Harrison Jr.’s first reaction was, “Whoa, this is really dark.” What the experience brought the trio was a sense of community, “and the intimacy that comes with baring your soul,” Latimore explained. “We’re talking about a film that’s highlighting mental health issues, and sexual abuse, and all these other big, very important themes, so to share that with these guys, you have to get really personal.”

In the midst of his first feature, “everything was a new experience” for Elderkin, though he benefited greatly from years spent honing his craft in the short-form arena. “I’ve shot all around the world with all kinds of situations, from India to Morocco to Iceland, so all these experiences came together to help me with my perspective of what I wanted to bring to this,” the helmer said. “Stylistically, I wanted to bring an elegance to a film that takes place in this kind of community, and bring something different from previous movies I’ve seen.”

Shooting at 43rd and Avalon, “somewhere between South and South Central LA,” the director worked with producer Brad Feinstein to bring added authenticity to the project, setting it apart from previous filmic portraits of the area.