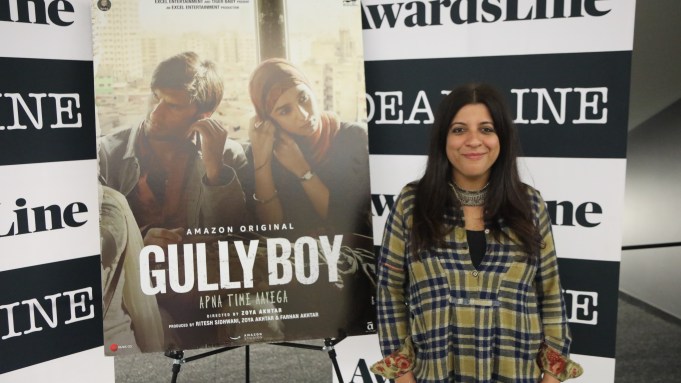 Selected to represent India in the 2020 International Feature Film Oscar race, Gully Boy, co-written and directed by Zoya Akhtar, is an exploration of the street hip-hop culture in Mumbai.

Akhtar’s musical romance drama is a coming-of-age story that revolves around Murad (played by Ranveer Singh), a 22-year old college student, living in a slum in Mumbai, who conveys his frustrations through his emotive lyrics. Murad has big dreams of being on the center stage but must contend with his family, especially his father, who believes his future is in a menial office job. As he dives deeper into the world of music, Murad’s life changes – and so does his relationship to his family and to longtime love Safeena (played by Alia Bhatt).

The impetus for this film came when Akhtar was first introduced to a music video by local conscious rapper Naezy.

“It was this guy with an insane vocal flow and he was just rapping and it was shot on a phone and it was all over the slums. He was rapping about his family, his mother, the state, the way society treats him, the fact that he is Muslim,” said Akhtar following a Deadline Awardsline screening of her film.

“Till then hip hop in India had been very derivative and very commercial… it’s not something I engaged with. I just kept going back and watching this video.”

Once she was able to connect with Naezy, Akhtar was then introduced to the whole underground scene.

“I just wanted to meet him because I felt there’s a story here because this voice, you know, the 20-year olds, they are completely disenfranchised and they do not have any representation in the mainstream. The beauty about the internet is that they have access to and all their inspiration is American rappers. So they’re suddenly educating themselves and they’ve taken it and made it their own and they are spitting their truth.”

In order to portray the story and the society accurately, Akhtar brought on the artist to consult on the film. “I spent a lot of time with the boys and they were my touchstone on the film. I did extensive interviews with people from the scene… the thing with hip hop and why it comes from the streets in India at least, is you don’t need money to make it. It’s scavenger music. You can rip a beat off the internet and you just write and spit on it.”

While the film centers on Murad and his journey, Akhtar felt it important to give substance to the storyline of Safeena, who has big ambitions of her own.

“I come from a space where I wouldn’t say all, but most of the films have really shortchanged women. I don’t mean just the actresses, even just depicting us in that culture. It’s been short-changed,” said Akhtar. “Your characters have to be fleshed in a particular way otherwise why are they there. A lot of our films have women and they are just props.”

“Every time you make a film you want to put something out there and that’s important to me. You have to be able to not just have women that are different but even men because the type of toxic masculinity in most of our films, it’s too much.”

Check out the video above to hear how multi-platinum artist Nas came on board as an executive producer.