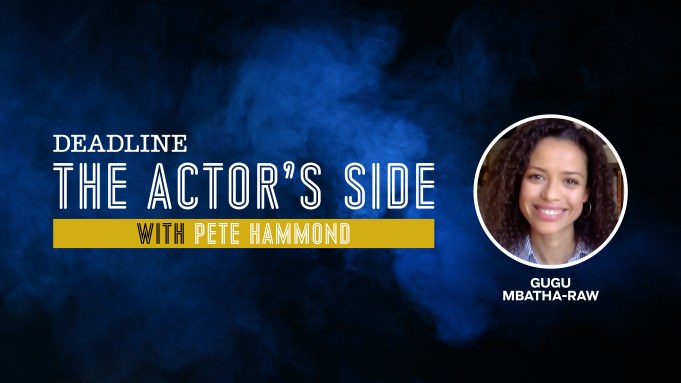 In this week’s episode of my Deadline video series The Actor’s Side, I start out by asking Gugu Mbatha-Raw about her full name and the meaning behind it. You can imagine that with such a distinct name she is asked often, and indeed she says she is. Gugulethu, her full first name, means “our pride.” That seems fitting for this star from England, who has lit up screens big and small as well as the theater. She got her start at the Royal Academy of Dramatic Arts and has performed in numerous productions including a varied menu of Shakespearean roles in Romeo and Juliet, Antony and Cleopatra, Hamlet and so on.

In our lively conversation, I compare the almost-operatic arc of her latest project, Apple TV+’s The Morning Show, to something quite Shakespearean itself, and she agrees that the highly dramatic scenes had a bit of that feel to them. In the series she plays Hannah, a staffer on a morning show who becomes the victim of sexual assault by the male anchor played by Steve Carell. Mbatha-Raw rightly won great acclaim for her work and talks about it, and its importance in these times, in detail. She notes that although there are obvious comparisons to NBC’s Today, the source material was inspired more in some ways by Britain’s Top of the Morning  and was already written and shot by the time scandal hit Today.

Mbatha-Raw talks about the challenging role, including a confrontation with Bradley, the co-anchor played by Reese Witherspoon, who is trying to get the devastated employee to go on camera to talk about her experience. It is a seven-page scene and heavy stuff, to be sure, and Apple even slapped a warning on her key episodes about the severe nature of scenes depicting sexual assault, something she thinks is very appropriate.

We also talk about her unique filmography including breakout roles in Belle, Beyond the Lights, as well as Misbehavior, Come Away, Fast Color, A Wrinkle in Time, Irreplaceable You, the upcoming Summerland and the one link to all of them: All were directed by women. Find out why Mbatha-Raw calls her career choices in that regard “greedy.”

To watch The Actor’s Side with Gugu Mbatha-Raw, click on the link above.