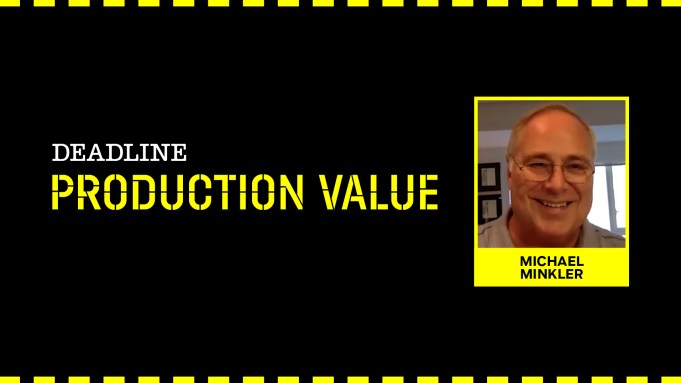 As one of the supervising sound editors and re-recording mixers behind WWII thriller Greyhound, Michael Minkler looked to immerse viewers completely, in a dramatic depiction of the Battle of the Atlantic.

Directed by Aaron Schneider, the Apple TV+ title centers on Captain Krause (Tom Hanks), a U.S. Navy commander who gets in over his head, when he embarks on his first wartime assignment aboard the Greyhound destroyer. While leading an Allied convoy across the Atlantic, Krause fends off repeated attacks from a pack of German U-boats, battles the elements at the same time.

Interestingly, on Greyhound, two-time Oscar winner Hanks wasn’t just leading the cast. In the case of this film, he had also written the script, which was based on the novel The Good Shepherd by C.S. Forester.

While Hanks’ creative role on the war film would inform Minkler’s process in sound, the actor was also his way into the project. After working on a few films with Playtone—the production company run by Hanks and producer Gary Goetzman—Minkler was approached to work on Greyhound, alongside supervising sound editor Warren Shaw, while the film was in prep.

A couple of months later, production kicked off in Louisiana, and Minkler’s long journey with the project began. Ultimately, he would work on it for two years and four months, remaining aboard from the first day of shooting until the last day of mixing, even as some department heads moved on to other endeavors.

Shot on stages, as well as the retired destroyer USS Kidd, the oceanic adventure could only come to life through the contributions of artists in sound and visual effects, who would round out its world, given that there wasn’t one drop of real water present on set. Naturally, it was critical for both Minkler and Shaw to understand what a WWII destroyer sounds like, from the inside, so the pair made a pilgrimage down to Louisiana, to see the Kidd for themselves. “We [were]…not necessarily recording anything,” Minkler says, “but learning about the boats.”

Gathering almost every sonic element necessary to sell Greyhound’s story, involving period warplanes, boats and technology, Shaw would complete the first pass of the film’s sound, with Minkler entering the fold later on. “As always, you start with library sound effects. But then, you throw them out and/or enhance them,” Minkler says. “So, everything has changed, and then there’s the foley work.”

After the first cut of Greyhound was locked, many more were undertaken to refine the film, Hanks being a key player in this process. And over this period of time, the picture changed substantially—which meant that sound would have to change, as well. “We’d start mixing, and changing, and re-editing, and then…we had to go back to the drawing board because it became so robust. It went up eight notches in the visuals, so we came back and had to really jazz it, and just hit it hard,” Minkler says. “It was intense and a lot of fun. So, it was like we hit it once, and then we hit it again, and then we hit it again.”

For the supervising sound editor, this lengthy, iterative process was enjoyable, simply because it was so different than those he’s experienced on other projects. “It was a wonderful experience,” he says, “because so many times, it’s so quick and methodical, from pre-production to production to post and done, out the door.”

At the same time, he and Shaw needed to protect the film’s dialogue, and key beats in its story. “Pauses and looks and things, all of that needs to be protected,” he notes.

An additional sonic component to consider was the film’s score, composed by Blake Neely. “Almost the entire movie is scored, so the music had to do pretty much the same thing that the sound effects were doing. So, we had to make that balance,” Minkler says. “It’s a layering process, so that was a challenge, going over and over it in large pieces, once we got all the small pieces that we liked.”

A three-time Oscar winner and 12-time nominee, Minkler was called to work in sound from a very early age, given that he grew up in a family full of distinguished sound professionals. His grandfather, Darrell, contributed to the creation of the Vitaphone, opening up a studio called Radio Recorders in the early 1940s. Subsequently, his father Don started another studio, Producers Sound Service, where the younger Minkler would begin to hone his craft, using the “crude, cumbersome [and] slow” technology available at the time.

Then, there were Minkler’s uncles, Lee and Bob, with whom he shared an Oscar nomination in 1983 for TRON. Remarkably, this was the only time in Oscars history that three members of a single family were nominated in the same year, for the same film.

It was in 1976, though, that Michael Minkler hit on his big break, as an individual. “The head of the [Warner Bros.] sound department needed an extra hand on the mixing board, in their big feature film stage. He had called my father looking for a guest mixer, and I happened to be the only one available and said, ‘Please, please send me,’” Minkler recalls. “Next thing I knew, I stayed there for four years, and that was the biggest break of my life.”

Eventually, after working on various acclaimed films at the studio, Minkler went freelance, and it was at this point in his career that he opened up opportunities not only for himself, but for an entire community of artists.

“The whole pay structure changed because when I went freelance—and I was the only one out there doing freelance—I started to negotiate with the producer and the production company, rather than with my studio boss. It gave me a lot more freedom to negotiate,” Minkler shares. “I would find myself going up and up in rate, and within five years, all the mixers had followed.”

Sound artists were thus able to establish themselves, Minkler says, “[so] that if you want a really good mixer, you’re going to have to pay for it. The studios started throwing money, hiring guys, and it opened up the whole post-production landscape—and it’s still kind of that way.”

Over the years, Minkler has been able to work on all kinds of projects. “I have been so lucky to be able to do big ones and small ones, and interesting ones, and even the bad ones. I mean, you learn from everything,” he says. “You’ve got to be learning something every day, even if you’re learning what not to do.”

While Minkler has edited and mixed sound for a range of revered filmmakers, including Oliver Stone and Quentin Tarantino, one of his most notable experiences came, for better or worse, when he worked with the legendary Robert Altman.

“Altman was a character. I only did one film with him. I worked with him personally for one year, and that was on the movie Popeye,” he shares. “It was a crazy time in his life; it became a crazy time in my life, and [in that of] pretty much everybody who worked on it. He was just a wild man.”

The experiences that stay with Minkler, with regard to Altman, have to do with the reception of his 1980 comedy. After Popeye was panned by critics—“probably deservingly so”—Minkler and Altman ran into Pauline Kael in New York. The famed film critic had broken the film’s embargo, publishing her review of Altman’s latest two days before anyone was supposed to.

“That night, he was steaming. We were in New York at Elaine’s restaurant, and she comes over. I’m at the table with Robert and his wife, and a couple of other people, and she came over to say hello,” Minkler remembers. “He looked at her and his eyes went big. He leaned over and grabbed his wife’s full glass of red wine, and threw it in Pauline Kael’s face, and said a few words to her for breaking the confidence.”

Two weeks later, Altman was still incensed by the film’s reception, sharing a few more choice words with the heads of every Hollywood studio, while Minkler was in his office. “That’s when he got banned from Hollywood, and he was gone for about 10 years,” Minkler says, with a smile. “But he came back.”

While Minkler has accomplished just about everything imaginable, in his field, what keeps him excited about going to work is the fact that every movie he makes is different, presenting its own set of unique challenges. “I just don’t have the physical, mental, emotional makeup to go in and do the same thing every single day, in a normal job,” he says. “I have to stay stimulated, and that stimulation keeps me wanting to keep doing it, no matter what comes along.”

For more from our conversation with Minkler about Greyhound and more, click on the video above.