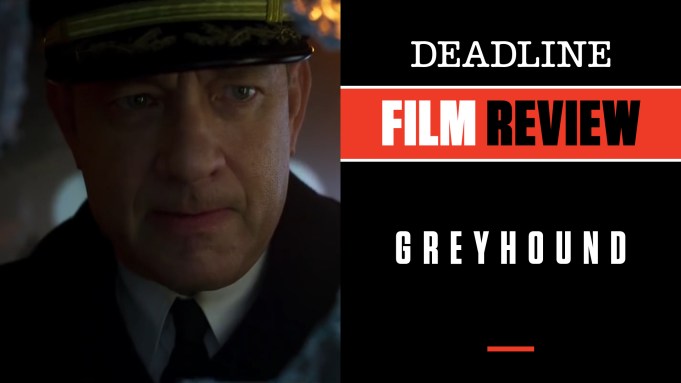 “Old fashioned” is a term that can be used in a non-flattering way, but in describing Tom Hanks’ new World War II film, it is a compliment. In terms of a genre that has been done repeatedly since, and during, that immortal conflict itself, it is hard to think of a way to bring any new light to it. Greyhound, a fictional story based on C.S. Forester’s 1955 novel, doesn’t rewrite the book on WWII but still does it proud and in the process uses CGI and special effects to tell the tale in as modern a way as possible visually.

At its heart, however, it is an understated and stoic performance by Hanks — who also adapted the book and whose company Playtone is a production entity — that reminds of the best we can be when duty calls, rather than the worst, as our current leaders seem to remind us each and every day. It was indeed the “greatest generation” at work to save the union and the world, and old fashioned or not, it is something we can hang on to, an inspiring message at a time when we need to hear one.

Sony Pictures originally planned an early-summer theatrical release for Greyhound, but instead, due to theater closures because of the coronavirus, sold it to streamer Apple TV+ in a reported $70 million-plus deal. It looks onscreen like an expensive film, and I dearly wish I could have seen it with all the bells and whistles a fully equipped movie theater could have provided rather than fighting my own battle with a buffering video link. That it was as impressive even under those viewing circumstances is a tribute to the filmmakers, including director Aaron Schneider, an Oscar winner for the live-action short Two Soldiers, making him a good choice to steer this ship.

Hanks plays Commander Ernest Krause, who at the beginning of the war suddenly finds himself with the difficult task of guiding  one of four ships leading a convoy of 37 merchant vessels loaded with crucial cargo through the North Atlantic to England. Stormy seas and gray weather aren’t all that these men have to endure, there’s also the fact that sophisticated German U-boats look at this as an opportunity to come out of nowhere and attack without a moment’s notice. It is the ultimate cat-and-mouse game, but the stakes are as high as they get. And even though this is a fictional story, just as Hanks’ other WWII role in Saving Private Ryan was, it is very authentic to similar crossings during the war, which sadly led to more than 72,000 casualties on our side.

Krause is a man who clearly, just by the expressions on his face, knows the weight of the assignment he has been handed. It helps that he is a man of deep faith and belief in God, and this is the rare movie outside the faith-based genre that shows a hero praying.

Those prayers are needed as Krause navigates this ship through what is known as the “black pit,” about as frightening a voyage imaginable. Although this aspect of the war might not have gotten as much attention, it makes for a very cinematic experience and, because of modern technology, is wildly more sophisticated than movies made during the war like Humphrey Bogart’s 1943 Action in the North Atlantic could be, despite their patriotic and entertainment value. The cinematography of Shelly Johnson is superb, and there are plenty of nail-biting moments, including near collisions in the crowded seas, that make this a perfect summertime action picture. Much of it is focused on the interiors (shot on a Louisiana sound stage),  but isn’t nearly as claustrophobic as some other movies set in the same sphere like Wolfgang Petersen’s superb six-hour sub picture Das Boot.

As for the cast, there is only one woman on view and that is an early scene with Elisabeth Shue as Krause’s girlfriend, as they meet and she rebuffs his attempt to become engaged before taking off on this mission. She wants to wait because she fears she might never see him again. It is a scene totally devoid of the clichés of the genre and one that brings the fear home in a way I haven’t quite seen. Stephen Cole, Manuel Garcia-Rulfo and even Hanks’ son Chet pop in an out, and perhaps most memorably Rob Morgan as a messmate who brings Krause dinners that often go uneaten. Their interplay in quiet moments is effective, if brief.

This film, though, belongs lock stock and barrel to Hanks, who never goes for the showy moments. Add it to the list of compelling heroic characters, most real-life people, he has been drawn to like Sully Sullenberger, lawyer James Donovan in Bridge of Spies, Ben Bradlee in The Post, Captain Richard Phillips, astronaut Jim Lovell in Apollo 13, and most recently Mister Rogers in A Beautiful Day in the Neighborhood — all men who promote the good in human beings. There is unquestionably a reason Hanks has so often been called this movie generation’s Jimmy Stewart.

He is also to be congratulated for telling these heroic WWII stories, even as a producer, with projects like Band of Brothers and The Pacific. And again, though fictional in story, the authentic documentary footage of similar crossings is a very sobering reminder during the closing credits that Greyhound has its own foot in real-life heroism.

Producer is Gary Goetzman. Apple begins running it on Friday. Check out my video review with scenes from the film at the link above.

Do you plan to see Greyhound? Let us know what you think.