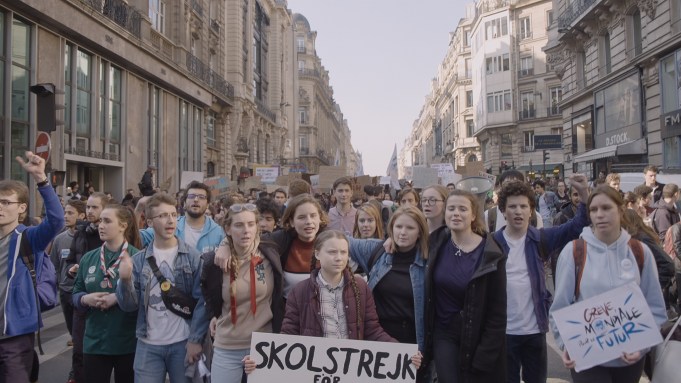 EXCLUSIVE: Here’s first footage of anticipated Hulu documentary I Am Greta, about climate activist Greta Thunberg, which debuts this week at the Venice Film Festival before playing at Toronto.

The story of the inspirational teenage activist is told through never-seen-before footage from Swedish director Nathan Grossman. Starting with her one-person school strike for climate action outside the Swedish Parliament, Grossman follows Thunberg – a shy student with Asperger’s – in her rise to prominence, and her galvanizing global impact as she sparks school strikes around the world. The film culminates with her remarkable wind powered voyage across the Atlantic Ocean to speak at the UN Climate Action Summit in New York City. B-Reel Films produces.

Director Grossman met now global icon Thunberg though a mutual contact shortly before her first school strike. He was intrigued and asked if he could film her demonstration, envisaging a short film about it or including Thunberg in a film about youth activists.

After bonding over their shared concern for climate change, the activist agreed to allow Grossman to continue filming. The cameras rolled for two years with the filmmaker crisscrossing over Europe with Thunberg and her father by train, boat, and electric car.

Thunberg, who is unable to be in Venice because she has returned to school and doesn’t take planes, said: “I really like the film and I think it gives a realistic image of myself and my daily life. I hope anyone who watches the film can finally understand that we young people aren’t school-striking just for fun. We are protesting because we don’t have a choice. A lot has of course happened since I started school-striking, but sadly we are still stuck on square one. The changes and the level of awareness needed are nowhere to be seen today. All that we ask for is for our society to treat the climate crisis as a crisis, and give us a safe future. I think the film shows just how far that is from happening right now. It shows that the urgency of the scientific message isn’t getting through.”

Director Nathan Grossman told us: “I’ve been making this film for two years and it feels very exciting to finally bring it into the world. I’ve learnt that in documentary filmmaking you never know what’s around the corner, when I first met Greta when she was just one girl sat alone outside parliament I had no idea where her path would lead. I have tried to create a film from her perspective that I hope it will give viewers a deeper understanding of her and her tireless work to bring urgent attention to the climate crisis. It should never have had to be this young girl’s responsibility to wake us up to this, but she has really done remarkable work. Climate change is a major global crisis and I hope that the response we have seen worldwide to the COVID-19 epidemic can prove that massive rapid changes and huge financial investment are possible when there is enough political and social will.”

After Venice and Toronto the film is expected to play at additional U.S. festivals before launching on Hulu in the U.S. on November 13.