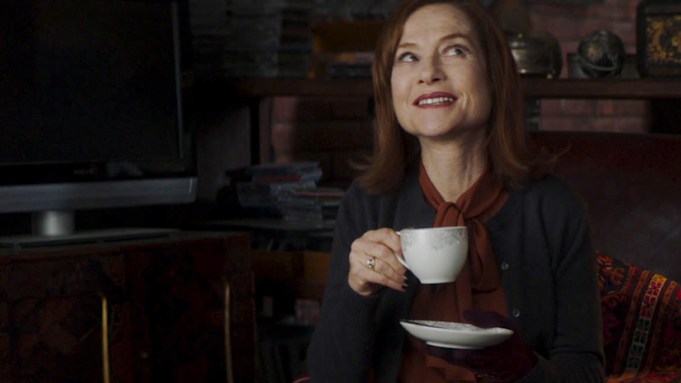 For me, one of the joys of last September’s Toronto Film Festival was watching Isabelle Huppert go for broke playing a disturbed lonely woman in the suspense thriller Greta. It falls into a genre we don’t see as much anymore, at least on this scale, echoing movies like Fatal Attraction, Misery, The Hand That Rocks the Cradle, Single White Female, etc. — all movies where the female lead starts out normally enough but eventually turns into a whack job. That happens in Greta too, but it veers from the formula in the sense that this is completely female-driven on the screen, with three strong roles including Huppert as the title character; Chloe Grace Moretz as Frances, a vulnerable young woman caught up in events beyond her control; and Maika Monroe as Frances’ skeptical roommate. In that sense it is the kind of thing that attracted big female stars in the ’60s to the likes of Whatever Happened to Baby Jane? and What’s The Matter With Helen?

Oscar-winning director-writer Neil Jordan (The Crying Game, Interview With the Vampire) hasn’t really tackled this genre before but proves he has a real knack for it as Greta hits all the right beats you might expect, making it — so far at least — the best thriller of the year. In fact. it is the best I’ve seen in a while, certainly since Toronto.

Much of the reason revolves around Huppert’s deliciously over-the-top but on-target depiction of an older widow who lures young women to her home by intentionally losing her purse on the New York City subway. That is where, in the opening scene, Moretz’s Frances finds it. Returning it to Greta’s home, Greta invites her in for coffee thus starting a friendship that eventually careens out of control as Frances’ suspicions mount (for good reason) and the obsessive woman stalks her, showing up everywhere whether by text messages or at the restaurant where Frances works, where she goes ballistic.

If you know the genre, you can imagine where this all leads, but Huppert knows exactly how to keep it on track so it doesn’t get so extreme it loses all credibility. Jordan is clearly aware of that too, and in Moretz has found the perfect actress to underplay it opposite Huppert’s histrionics. Often without dialogue, Moretz savvily suggests the increasing terror her character feels in a situation from which she can’t seen to extract herself. Monroe, the voice of reason, also handles it nicely, particularly in an instant classic sequence in which she is stalked by Greta via photos on Instagram. Truly terrifying. Stephen Rea, who starred in Jordan’s classic The Crying Game, is effective in a brief scene as an investigator. Still, this movie belongs lock, stock and barrel to Huppert, truly one of the greats of her time.

Jordan, credited as writer with Ray Wright, who came up with the story, brings in plenty of twists and turns including a clever trick on the audience at one point that ought to have heads spinning. It’s that kind of movie. The use of music — particular haunting themes from Franz Liszt, played with precision on the piano by Greta — is another key ingredient to making this contemporary Grand Guignol all work, as does the sharp and effective handheld camerawork of Seamus McGarvey.

Focus Features releases it Friday. Producers are Lawrence Bender, Sidney Kimmel, James Flynn and John Penotti. Check out my video review above which includes scenes from the film.

Do you plan to see Greta? Let us know what you think.