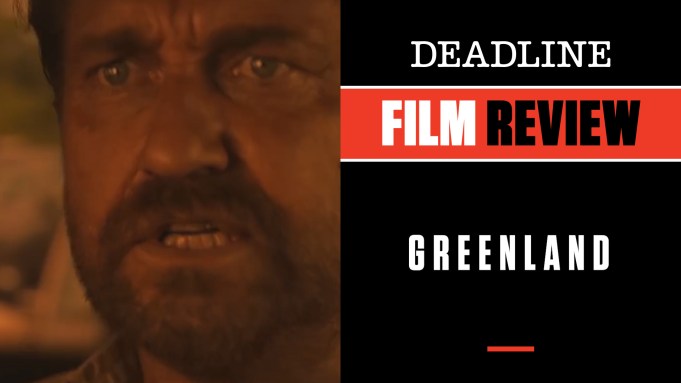 Considering the planet is battling a pandemic that has leveled the playing field in terms of who it strikes, the time is oddly right to celebrate this very different holiday season with a disaster film about a killer comet that does not play favorites in choosing who it turns its wrath on. STX Entertainment might not have realized it at the time, but Greenland is a movie with resonance beyond the usual tropes of the well-worn genre from which it came as families this season struggle to stay together despite fear of the unseen ravages of Covid-19 infiltrating their lives and threatening loved ones.

You wouldn’t be wrong to think that any movie with a premise in which a planet-killing comet that could make us as extinct as the dinosaurs, and stars none other than Gerard Butler, might be more in line with the kind of ridiculous Hollywood hokum in which an action star (think any movie with Dwayne “The Rock” Johnson) battles to the death with unseen forces of nature in his path. That certainly is what I thought, considering Butler’s recent output of entertaining, if ludicrous, excuses for brawny histrionics like his Has Fallen trilogy, or even another much-lesser disaster outing like Geostorm. I know what to expect, but instead Greenland did not turn out to be Butler vs. the comet, but rather a father — estranged from his wife and with a son who has a medical condition — desperately trying to lead his family into safety against all odds of surviving a cataclysmic event.

The basic plot has people around the globe celebrating the emergence of a rare comet hitting Earth but expected only to set off mild fireworks. In fact, it appears to be a cause for joy, with live television coverage. But when Florida suddenly becomes the first epicenter of unexpected mass death and destruction due to its arrival, and scientists suddenly predicting world destruction on a scale never known within the next 24 hours as it weaves its way around the globe, only a select few are sent text messages to report to a place where air transport will shuttle them to a “safe” haven with Cold War-era bunkers to survive (thus the importance of the film’s title).

Among those chosen is John Garrity (Butler), a structural engineer who is targeted to live so he can be around to help rebuild the planet in the comet’s aftermath. His estranged wife Allison (Morena Baccarin) and their son Nathan (Roger Dale Floyd) have been approved to accompany him. Unfortunately, John separated from them amid the mass panic that ensues, leading to encounters with strangers driving to escape the calamity any way they can. Allison and her diabetic son also are separated from each other after one deceptive couple (David Denman, Hope Davis) basically kidnaps Nathan in order to pass themselves off as the Garritys rather than who they actually are.

Meanwhile, John faces humanity at its worst as he has to fight off some baddies also out for themselves. Fortunately his message to Allison to eventually meet at her father Dale’s (Scott Glenn) house gives each a destination point that ultimately leads to the final act — a whopper of a fireworks show as the comet goes full force and a family, torn apart in many ways, must struggle to survive and come together.

The usual beats of any disaster flick can be found here, but the execution and emphasis is quite different as Greenland establishes a strong emotional core enveloped in the importance of family ties. That is the motivating factor here for Butler’s character and his desperate plight. The focus on this familial unit is what keeps Greenland from going off the rails, even as some of the roadside encounters veer close to cliché. I always have thought Butler to be an appealing action star even in the dumbest circumstances, and his ability to make us care comes in handy here, especially as he and the others  constantly are battered by the fireballs set off by the killer comet. Baccarin and Floyd also get to be more relatable than the genre usually allows, and veteran Glenn makes impact with his key sequence. Director Ric Roman Waugh (Angel Has Fallen) is adept at keeping the pace and the special effects in step with the emotional heft of the story, never letting the CGI overtake to narrative of Chris Sparling’s (Buried) nicely crafted screenplay.

Producers are Butler, Alan Siegel and Basil Iwanyk. STX releases it Friday on premium VOD. Check out my video review with scenes from the movie at the link above.

Do you plan to see Greenland? Let us know what you think.