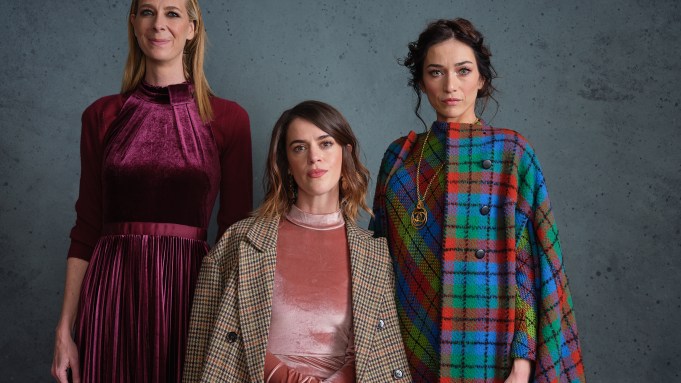 In the Sundance comedy Greener Grass from the writing-directing team Jocelyn DeBoer and Dawn Luebbe’s, we are thrown into the perfect world of an idyllic suburban community — a world that actress Mary Holland was immediately drawn to when she first saw the short it was based on, which premiered at SXSW.

“I thought it was striking, disturbing, and unique,” said Holland, who visited the Deadline Sundance studio along with DeBoer and Luebbe’s. “The world they made was so specific and it felt very strange and surreal but at the same time so relatable.”

In the film, we enter a world where perfect families that spend their days in the grocery store exchanging fashion tips and at birthday parties complimenting their neighbors’ potluck dips. As the women desperately vie for validation, they struggle to maintain pleasantry and normalcy, even when things get weird. And they do get weird. When Jill (DeBoer) gifts Lisa (Luebbe) her newborn baby in an altruistic gesture, paranoia overwhelms Jill while her fears and anxieties quickly unravel. Holland plays a character named Kim Ann in a world where everyone is trying to be the “best and most elite.” Holland says that “Kim Ann has no question in her mind that she is” the best.

“She has the most confidence and has no self-doubt,” she admits — even though she jokes that its nothing like her.

The trio comes from the world of the Upright Citizens Brigade, a comedy improv group that often collaborates together for projects. DeBoer points out that frequently collaborating with her UCB peers is advantageous because they have known each other for years and they have a natural chemistry that comes out when they perform — and it certainly shows with the characters they play in Greener Grass.

“The identities [of the characters] are based on people around them,” says DeBoer. “That is their community… that is how they decide their open, misplaced values.”