Continue to Deadline SKIP AD
You will be redirected back to your article in seconds
Skip to main content
February 28, 2020 4:12pm 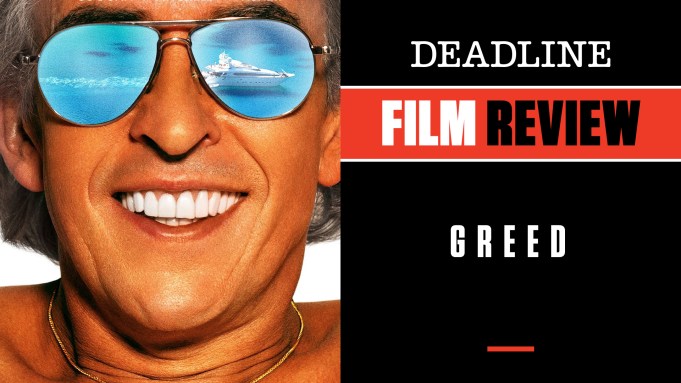 The character of British fashion mogul Sir Richard McCreadie in the new satire Greed is fictional, but as you will see in this very potent film from writer-director Michael Winterbottom (co-written by Sean Gray), he cuts close to the bone. With tabloid-fodder billionaires so much in the news today, and at the center of the U.S. presidential race, you could be forgiven if you think star Steve Coogan is channeling anyone we might know.

The fact is Winterbottom was inspired by British businessman Phillip Green, head of the Arcadia Group, but the filmmaker is quick to point out it isn’t about him directly and McCreadie (rhymes with greedy) is an amalgamation of numerous egocentric rich guys who seem to have only their own self interests at heart. Certainly that is the case with this film, which reveals all the shortcuts, dirty dealings, ruined businesses and dubious get-rich-and-richer methods that McCreadie employs to stay on top while having his fashion line made in the sweatiest of sweathouses overseas. This is how he builds his own celebrity and tax-free empire.

Winterbottom paints a not-so-pretty picture of this guy using various devices to chart his rise (Jamie Blackley plays his younger self), and even a biographer named Nick (David Mitchell) he hires to write his story, with Nick serving as kind of a Greek chorus to all that is going on here. And there is a lot going on as the plot centers on an elaborate and decadent 60th birthday party McCreadie is throwing for himself on the Greek island of Mykonos. Indugent doesn’t begin to describe it, but at the center of it all is a re=creation of scenes from the movie Gladiator, complete with togas, in which McCreadie will face off in a pop-up Colosseum against a live lion. Celebrities are paid to fly in to attend and make the festivities look all so important (Colin Firth is among a number of cameos here) and the whole thing will take place over the course of three days. This level of wealth porn is countered by the fact that a group of Syrian refugees has camped out right on the beach below, as well as scenes set in the Sri Lanka factory where the clothes are made.

Winterbottom takes this whole story progressively darker as it goes along and we enter the head of a Trumpian-style man who willingly cuts every corner in order to line his own pockets and present a certain image to the world, all the while demanding respect from his underlings. The device of a government hearing into his activities also is used, and that is what got Winterbottom interested in this kind of tale when he saw Green subjected to one of them. But again this is fictionalized and brilliantly uses humor to sock home so many of its sad truths. It is a movie that is timely and of its time, a sad commentary on the divides in our society between the haves and have-nots that is designed to entertain us while making us think about how we got all our material things, and what human price was also paid for them.

Coogan, who has worked numerous times with Winterbottom, is ideal casting here and turns in one of his best film performances, complete with ultra-white dentures contrasting the permanently manufactured tan on his face. Isla Fisher is lots of fun as his ex-wife, set up with her own payoff and perhaps forging a better understanding of her ex than when they were together. Mitchell, a British comedian, is right on target as the ethically challenged writer snooping around all the time in order to pen the so-called definitive bio of this man, one that might not be exactly what McCreadie thinks he is paying for. Veteran Shirley Henderson also is excellent as McCreadie’s mother, spanning 40 years, and Asa Butterfield scores some nice screen time as his son, among the large, expertly chosen cast that includes some real refugees and factory workers among the ensemble just to give it a further ring of truth.

Producers are Damian Jones and Melissa Parmenter. Sony Pictures Classics puts it in limited release today. Check out my video review at the link above with scenes from the film.

Do you plan to see Greed? Let us know what you think.