DC Disruption Has Town Jittery: What's Next For ‘Man Of Steel’ & Other Sequels After ‘Wonder Woman 3’ Jolt
Read the full story
January 2, 2020 9:00am 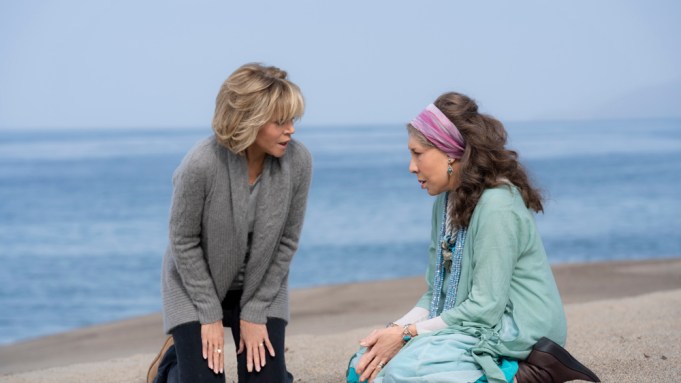 The just-released Season 6 trailer for Grace and Frankie kicks off with Lily Tomlin’s Frankie making a toast to newlyweds Grace (Jane Fonda) and Nick, played by Peter Gallagher. “Raise your glasses people, to the newlyweds, Grace and Nick!”, says Frankie, to the clearly surprised friends and family.

The penultimate sixth season of the Netflix series picks up with Frankie still reeling from the news that her BFF is now married.

In Grace and Frankie, Fonda (Grace) and Tomlin (Frankie) star as two women whose lives are turned upside down when their husbands reveal they are gay and leave them for each other. Both sparring partners and partners-in-crime, Grace and Frankie form an unlikely and unbreakable bond and face their uncertain futures head-on, hand-in-hand. But things are clearly different in Season 6, with Grace a newly married woman.

Production on the seventh and final season gets underway in early 2020. When the show wraps, presumably in 2021, it will be Netflix’s longest-running original series.

The series has picked up 11 Emmy nominations during its run as well as six Screen Actors Guild Award nominations and a Golden Globe nomination for Tomlin.

Check out the Season 6 trailer above.