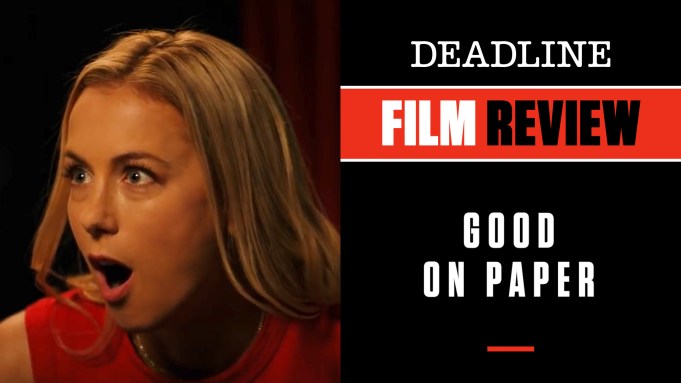 Up until about the last third or so of stand-up comedian Iliza Shlesinger’s new Netflix comedy Good on Paper, this clever and engaging film about a disastrous true-life relationship experience of Shlesinger’s works quite well in the overdone rom-com genre. But then it falls prey to the worst instincts of what passes for film comedy these days and goes over the top. The irony is that the broad and credibility-challenged bits that don’t work are exactly the parts of Shlesinger’s real story that she makes up, but fortunately they aren’t a fatal blow because she is such a relatable and likable presence and her original screenplay so smart up to that point that I can forgive caving to the current necessity to go for big laughs even if it kills the tone.

It is also easy to see why Netflix is eager to be in the Shlesinger business as she has done five highly successful comedy specials, appeared in supporting roles in other films on the streamer and has a rabid base of followers. I find it also nice that she has thrown herself into this particular story with such gusto that it seems like therapy just to put it out there. The idea itself is definitely good on paper and works good on screen for the most part, as long it stays close to her truth.

Shlesinger plays Andrea Singer, a thinly disguised version of herself as a stand-up comic frustrated that she is not getting the acting roles and TV opportunities she thinks she deserves, especially against rival Serena (a funny Rebecca Rittenhouse). After yet another failed audition, she meets a nebbishy guy named Dennis (Ryan Hansen) in the airport. Coincidentally (?) he winds up seated next to her on the plane, where he reveals he is a hedge fund manager and went to Yale. Although she thinks he is kind of a nerd, she politely invites him to see her do her act anytime — an offer he takes her up on.

She is as frustrated in personal relationships as she is in her career, but they become friends, and eventually she is seduced into more as he becomes her boyfriend. It is only then that she senses something odd about who he says he is, and with the urging of her best friend Margot (Margaret Cho), who doesn’t trust him one bit, they set out on an investigation and discover he has been telling more than a few lies. Shlesinger swears the great majority of the film is the absolute truth, and clearly it is sweet revenge for the star at this point to use her unfortunate time with this guy as grist for the comedy mill.

Shlesinger is a genuine talent and audiences love her, so they likely will lap this all up. She proves she can write smart comic scenes and delivers a sharp entertainment until it jumps the shark a bit. It would have been nice if she stuck to the actual details and kept it real. Nevertheless, she is a nice screen presence, and I really like the way director Kimmy Gatewood weaves her actual stand-up routines into the plotline as kind of a Greek chorus. If Netflix is smart, it might look at Good on Paper as a pilot for a series.

With the fun Dead to Me entering its final season, a Shlesinger sitcom where she is teamed with the wonderful Cho as they navigate their romantic lives (Cho’s Margot with women and Shlesinger’s Andrea with men) and their careers. Shlesinger even looks uncannily like Dead to Me star Christina Applegate. Or it could be a modern-style version of Marlo Thomas’ ’60s sitcom That Girl, in which her personal life collides with her showbiz ambitions. Sounds “good on paper,” at least. She definitely has the chops.

Producers are Han West, David Bernon, Paul Bernon and Sam Slater. It begins streaming tomorrow. Check out my video review with scenes from the film at the link above.

Do you plan to see Good on Paper? Let us know what you think.