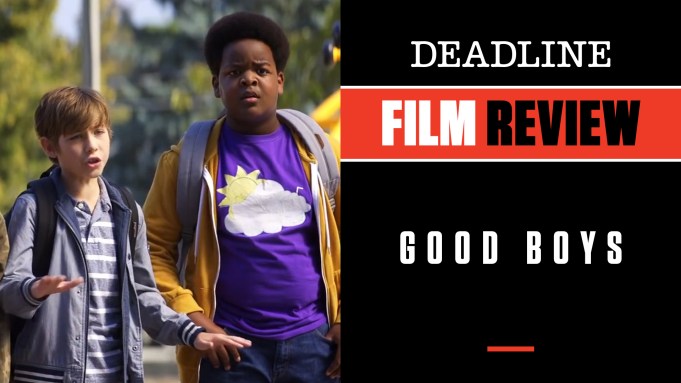 Good Boys may be about a trio of 12-year-olds, but with Seth Rogen and Evan Goldberg on board as two of the producers, you can bet this movie isn’t exactly for 12 year olds. In fact the filthy language coming out of their young mouths is more Goodfellas than what we hear from “good” boys and easily earns it a well-deserved R rating.

Oh, but did I say this movie is hilarious? It is, and even if its distant ancestor might be Superbad and others of the gross-out comedy ilk, director Gene Stupnitsky — who also co-wrote the script with Lee Eisenberg — invests it with a surprising amount of smarts and heart. Audiences old enough to get in possibly will recognize some of themselves in these kids.

Max (Room’s Jacob Tremblay) already is starting to feel the hormones and is a bit girl crazy. He sees the opportunity of landing an invite to a “kissing” party as a chance to get close to a girl he likes. The only problem is he doesn’t know how to kiss, so with the help of his friends — wannabe tough guy Thor (Brady Noon) and the more responsible Lucas (Keith L. Williams) — he sets out to learn, first exploring porn sites on the Internet but getting quickly turned off when they discover the kissing going on there isn’t what he had in mind.

Finally he gets the idea to use his father’s (Will Forte) beloved drone — without telling dad, of course — in order to spy on the teen girl (Molly Gordon) next door when her boyfriend comes over. That doesn’t go well when the drone crashes and she holds it hostage.

Plot in motion as the kids, who call themselves the Beanbag Boys, get wrapped up in events out of their control in order to get Dad’s drone back in its place before he can find out. Chases, a daring run across a crowded freeway (don’t try this at home, kids), a frat house brawl, negotiations for party drugs in their possession and a run-in with a blowup sex doll are among the shenanigans in store for this trio before it all comes to a frenetic conclusion.

The great thing is this movie never goes completely over the top, grounding itself with believable characters who are recognizably kids we all know. So much of the credit belongs to the casting of the three leads with Tremblay at the center of it all and totally engaging in his quest for a kiss. Noon is amusing throughout as a kid who thinks he is tougher than he actually is, but the real scene stealer here is the irresistible Williams, who not only is the one with common sense (“You brought drugs to a playground?!”) but also an actor who already has mastered perfect comic timing and line delivery. He’s a hoot, but are they all.

The Little Rascals might turn over in their graves at the language Stupnitsky and Eisenberg have created for our young stars, but somehow it is all just funny, not offensive.

Among the supporting cast, Forte doesn’t have a whole lot to do but does it well enough, while Lil Rel Howery and Retta score nicely in their few scenes as Lucas’ parents. Gordon and Midori Francis as the teen girls the Beanbags have to deal with add to the fun. Universal releases it Friday. Check out my video review above with scenes from the film.

Do you plan to see Good Boys? Let us know what you think.