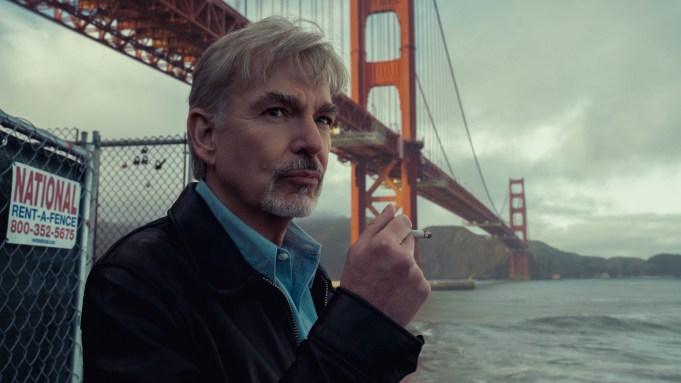 The fourth season trailer for Amazon Prime Video’s Goliath finally reveals the fate of Billy McBride (Billy Bob Thornton) after he was left for dead in the prior season’s finale.

“They said I flatlined for six minutes. I was dead then I wasn’t,” Billy says in the trailer above promoting the drama’s final series premiere on Sept. 24.

The character was shot by Diana Blackwood (Amy Brenneman) but he was still visibly conscious as the camera panned down to a puddle of rainwater where Billy catches a glimpse of his own reflection. Messages dropped throughout that season teased, “the last person you’ll see before you die is you,” leaving little hope he would live another day.

And not only did he survive but he will (hopefully) thrive as he faces one of the mightiest goliaths of the series: the opioid industry. The trailer also reveals a look at said goliaths George and Frank Stax, portrayed by J.K. Simmons and Bruce Dern, respectively. George is the leader of a family-owned pharmaceutical company, one of the biggest in the country, Frank is his brother, and Haley Joel Osment plays George’s son.

“The is the beginning of the end and I’m in the mood to stick my fist up your a** and pull out billions,” Billy tells George sternly. “You get it?”

Billy may now and accept it’s the beginning of the end but he’s not going out without a fight.