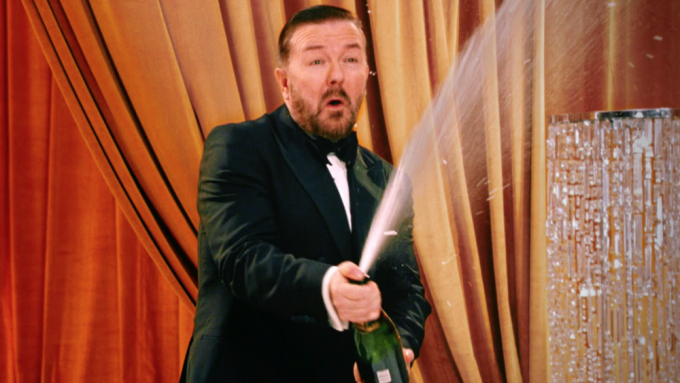 Ricky Gervais is back to host the 77th Annual Golden Globe Awards and to celebrate he brought champagne for everyone! Too bad he used it to make a mess.

The first promo for the annual ceremony dubbed as “Hollywood’s Party of the Year” aired today during Macy’s iconic Thanksgiving Day parade and features a dapper Gervais being told to “say the line” and pour himself a glass of champagne. He says “Hi, I’m Ricky Gervais and I’m hosting the Golden Globes!” He starts to pour himself a glass and then proceeds to shake the bottle and spray everything around him causing some technical difficulties.

This year’s Golden Globes marks Gervais’ record fifth time hosting the ceremony which will take place at the Beverly Hilton in Los Angeles and will air live coast-to-coast on NBC January 5, 2020 at 8 pm ET/5 pm.

A Golden Globe and Emmy winner, Gervais first took the stage as host in 2010 and returned in 2011 and 2012. He took a break and in 2016, he came back with his unique brand of humor which was funny to many, others, not so much.