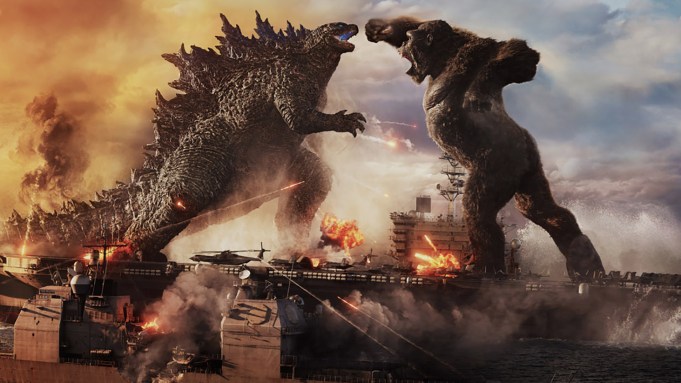 One has been attacking movie screens since Franklin Roosevelt took office, and the other has terrorized Tokyo since before rock ‘n’ roll took hold. It seemed inevitable that one day they would meet in the ultimate clash of the titans, and now, ladies and gentlemen, we have the first trailer for Godzilla vs. Kong. Check it out above.

Here’s the official logline for the mega-mashup from Warner Bros’ and Legendary: Legends collide as these mythic adversaries meet in a spectacular battle for the ages, with the fate of the world hanging in the balance. Kong and his protectors undertake a perilous journey to find his true home, and with them is Jia (Kaylee Hottle), a young orphaned girl with whom he has formed a unique and powerful bond.  But they unexpectedly find themselves in the path of an enraged Godzilla, cutting a swath of destruction across the globe.  The epic clash between the two titans — instigated by unseen forces — is only the beginning of the mystery that lies deep within the core of the earth.

Alexander Skarsgard, Millie Bobby Brown, Rebecca Hall, Brian Tyree Henry, Shun Oguri, Eiza Gonzalez, Kyle Chandler and Demián Bichir are among the human cast of the oft-delayed pic, is slated in theaters on March 31, then will be available on HBO Max for 31 days after theatrical release.

The film has been skipping around the release calendar during the pandemic and Netflix made a $200 million-plus offer for Godzilla vs. Kong just before the holidays. But Warners opted to keep it in-house and take it theatrical then to its nascent streamer. Take a look at the trailer, and let us know what you think.