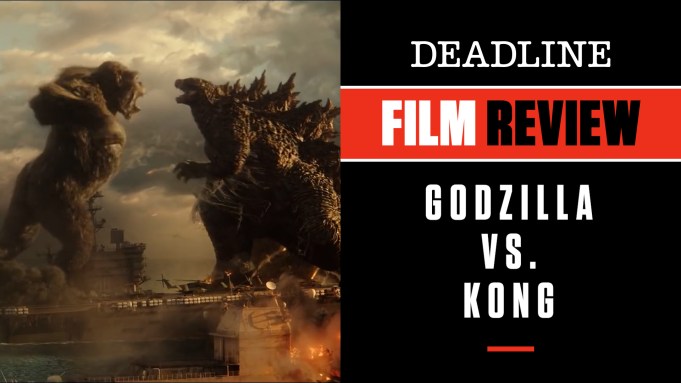 This is apparently the heavyweight match fans have been waiting for, and Warner Bros and Legendary’s Godzilla vs. Kong comes at the right time for global moviegoers beaten down by a worldwide pandemic that has forced studios to hold back their big blockbusters for hopeful eventual theatrical play. Yes, this fourth edition in the latest Monsterverse starring the iconic Titans will be available starting Wednesday domestically on HBO Max day-and-date with theatres, but internationally its run began last week with encouraging results for those wanting to see a revival of the multiplex and Imax where these two stars stomped over previous global pandemic records this weekend and look to be bringing fans back into theaters for a movie that really is designed for the big screen and should be seen on the biggest.

Following in the gigantic footsteps of 2014’s Godzilla, as well as 2019’s Godzilla: King of the Monsters in which the world’s most famous lizard battled nemesis’ Mothra, Rodan, and the three headed King Ghidorah, he returns again now after reverting to his dark side and stomping all over Florida (which if you think about it isn’t such a bad thing – maybe he can hit Mar-A-Lago in the next chapter). Then add to the mix 2017’s Kong: Skull Island which reintroduced the mighty King Kong to contemporary audiences and helped to set up this superstar pairing that promises to deliver a knockout like no other. However, what isn’t indicated in the title is the presence of another force, a human-made component that could just make mince meat out of both top-billed players.

On Team Kong at Skull Island we have the nerdy chief geologist of Monarch (the org devoted to studying both Titans) Dr. Nathan Lind (Alexander Skarsgard), his associate Dr. Ilene Andrews (Rebecca Hall) and a young deaf orphaned girl named Jia (Kaylee Hottle) whose parents were killed by Skull Crawlers and is the only human who seems to be able to communicate with Kong, the imposing creature who has now outgrown the Dome where they have contained him, as well as the Island. There is no question she and Kong are totally sympatico, and Andrews, who has adopted her, is seeing she can really help in transferring Kong back to what may be his ancestral home, Hollow Earth. Lind is under orders to keep things in check, and has ideas that perhaps the admittedly dangerous journey will have strong benefits for mankind which could be on the edge of extinction if things aren’t course-corrected. But as the voyage progresses trouble rears its head as the enraged Godzilla is on the loose and headed right for them. About 40 minutes into the picture thus the first encounter between the pair takes place in an impressive set piece full of state-of-the-art special effects.

Meanwhile over at tech company APEX, CEO Walter Simmons (Demian Bichir) has other plans, aided by his daughter Maia (Eiza Gonzalez) and associate Ren (Shun Oguri). In a Master Of The World moment he is creating a human-engineered robotic version of Godzilla known as Mechagodzilla (first introduced in a Japanese ’70s sequel), a prized technological achievement primed to take over the world and any monsters that stand in its way. APEX employee Bernie Hayes (Brian Tyree Henry), who is also a podcaster and conspiracy theorist, suspects his company may be up to no good, and is soon joined by Godzilla chasers Madison Russell (Millie Bobby Brown) and her goofy friend Josh Valentine (Julian Dennison) in getting to the bottom of it. Madison you may remember from the previous films, is a true believer in the good Godzilla and the force for humanity he can really be, but she is pretty much the only one since ‘ol GZ is getting some bad PR right about now as no one really knows why he has gone on such a rampage. Her father Mark Russell (Kyle Chandler) is also back in step having previously been skeptical but now joining forces with Monarch and their messaging about the Titans.

So you can probably guess where this is all leading, not only to the ultimate smackdown between Godzilla and Kong (carving up Hong Kong in the process this time around), but their joint nemesis Mechagodzilla, a man-made problem, but aren’t they all?  Of course this merging of two great cinematic brands — Toho’s Godzilla and RKO’s King Kong — two veterans who have toiled in countless movie appearances, has much to owe to its origins, but it also seems influenced by other films, notably Guillermo del Toro’s enormously entertaining Pacific Rim. Fans of the genre will be in hog heaven. The human stars do what they have to do to make this all credible and they came to play, but it is newcomer Hottle, a deaf actress herself, who brings the human touch and emotion that keeps us engaged and makes this feel more than just like an overgrown video game. It is also important to give a big shout out of course to the remarkable special effects mavens who keep pushing the envelope in terms of technological advancement for these blockbusters.

For purists it may not have the Saturday matinee charm of the original, less tech-savvy films that preceded it, but it still brought a smile to my face.

Check out my video review above with scenes from the movie. Do you plan to see Godzilla Vs Kong? Let us know what you think.