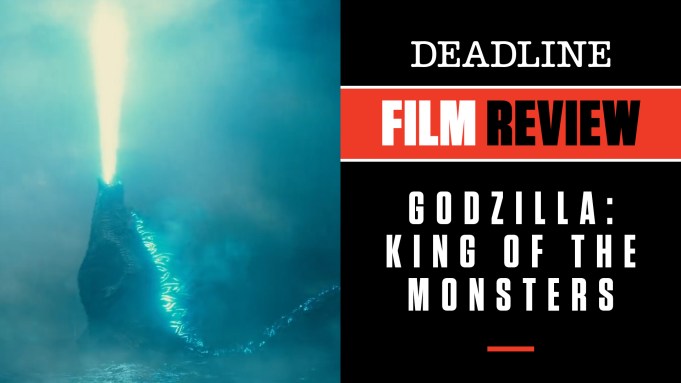 I have lost count of how many Godzilla movies exist in the universe, but it is probably safe to say none of the several dozen reaches quite the scale and size of Warner Bros and Legendary’s latest, Godzilla King of the Monsters. That actually was the title of the first movie out of Japan in the mid-1950s, a quaint black-and-white production badly dubbed in its English version but lots of fun to watch, if completely primitive to what is possible these days.

This one is Warners’ latest attempt to craft a summer blockbuster that can revive the big radioactive scaly fella in order to compete with all the superhero flicks on tap. It is the follow-up to 2014’s Godzilla, in which he stomped all over San Francisco, among other places. In this outing Godzilla has brought along a few friends including Mothra, Rodan and the truly frightening three-headed King Ghidora. Now safely in the hands of director Michael Dougherty, who also wrote the by-the-book script with Zach Shields, no time is wasted in getting to the action — lots of it — as we enter Monarch, a scientific organization housing various examples of these “titans,” whose fate is in the hands of humans with varying agendas.

Serizama (Ken Watanabe) mutters the unseen (for the past five years) Godzilla’s name a lot and is the key researcher who believes there is much to be learned from these behemoths. He is fighting a losing battle as some elements, notably the eco-terrorists led by Alan Jonah (Charles Dance), come in to take over and use the monsters for their own evil purposes. Along the way they kidnap another scientist Emma Russell (Vera Farmiga) and her daughter Madison (Millie Bobby Brown) in order to get the Orca, the key invention of Emma’s that uses sounds that either engage or enrage the big guys. In other words, she can control them, if others will let her.

Thrust into the bad side in many ways is Emma’s estranged husband and Madison’s father Mark (Kyle Chandler ), who is after Godzilla, blaming him for stomping on their only son in San Francisco five years earlier. Sally Hawkins, Zhang Ziyi, Thomas Middleditch and O’Shea Jackson Jr. are others at Monarch, who weave in and out of all the various destructive set pieces and battles that feel like they never end. Dougherty has packed this thing with all kinds of fire and fury and darkness — actually too much of it as he rarely lets the audience sit back and take a breather. This is Godzilla for the attention-deficit crowd, which is exactly why it probably will do just fine.

The action is plentiful and extremely loud, but the sound designers and visual effects artists deliver exactly what they are asked — and in the case of the realization of the monsters on tap, they succeed admirably. These CGI creations are impressive and foreboding, particularly the star supporting player this time, King Ghidora, a triplet you don’t want to anger. These monsters do the heavy lifting as Godzilla himself is saved as a closing act, but when he gets to do his 11 o’clock number, he kills. As for the humans, Chandler and Farmiga really throw their all into this and try to remain calm and alive as whole cities including Boston are being crushed in their midst. Watanabe always is a welcome presence, as is Brown, who convinces us she hasn’t seen “stranger things” than what is going on here.

This is the ultimate Imax movie, so check it out on the largest screen possible. Producers are Alex Garcia, Jon Jashni, Mary Parent, Brian Rogers and Thomas Tull. Warners turns it loose in previews tonight before beginning the regular run Friday. Check out my video review above, which includes scenes from the film.

Do you plan to see Godzilla: King of the Monsters? Let us know what you think.