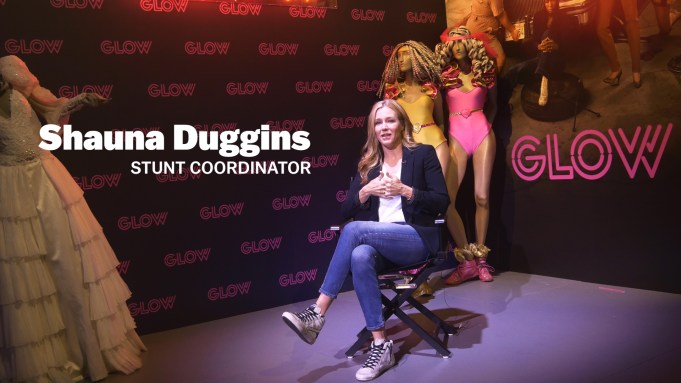 GLOW stunt coordinator Shauna Duggins won an Emmy last year for Outstanding Stunt Coordination for a Comedy Series or a Variety Program, after hitting the stunt biz lottery of sorts for handling the action on a series that revolves around female wrestling. The Netflix comedy is getting awards buzz again for a Season 2 where the intensity and skills notably ramped up in the ring.

“On GLOW, we have 15 actresses, and we get them for a month before and we get to train them,” said Duggins while sitting down for Deadline’s Production Value video series. “From Season 1 to Season 2 we started our month, and within two weeks they were already where we ended Season 1.

“These girls pick up so fast, and the muscle memory … it was just astonishing. So for the next two weeks i could just add on and add on these new skills.”

The work showed in the ring, as Alison Brie, Betty Gilpin and the group ratcheted up their moves from Season 1, which ended up being nominated for eight Emmys including Outstanding Comedy Series and won two (for Duggins, who also shared in the stunt ensemble SAG Award this year, and for production design).

Duggins, previously Emmy nominated in 2006 for Jennifer Garner’s Alias, singled out Episode 6 of Season 2, which included a montage showcasing each of the characters’ best moves that might have been easily mistaken for the real thing.

“We really push and ask a lot of our actresses — we want it to be them and we want it on their faces,” she said. “But to do those moves repeatedly is hard, and you’re getting into bigger and bigger moves. As a coordinator you sit there on that line, going, I feel 100% confident that they can [do this]. But at the same time you don’t want to see them to get tweaked or sore or anything, so you walk that line every time of going, ‘How much and how hard do we push, and then when do we pull back?”