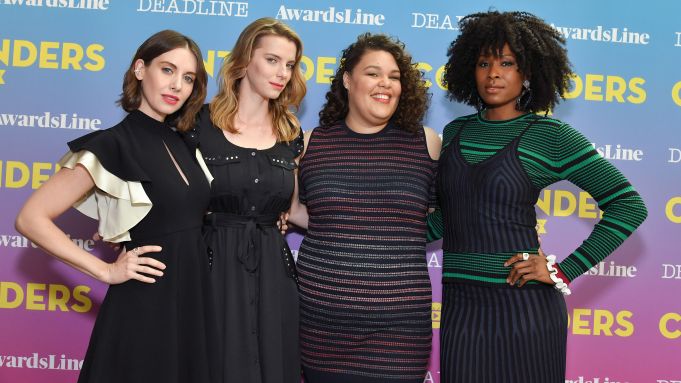 When Alison Brie first heard they were adapting the real-life GLOW into a Netflix comedy drama series, she wasn’t concerned about the risk at all — she was excited. “I think it’s because Jenji Kohan was behind it,” said Brie at Deadline’s recent The Contenders Emmys event. “Before I heard anything [about it], I was like, ‘Stop! This is the job! Get me the script.’ “

Brie was joined on the panel by her GLOW co-stars Betty Gilpin, Sydelle Noel and Britney Young to talk about the series based on the wrestling show from the ’80s that, to this day, has maintained a loyal cult following.

The female-centric series primarily focuses on the relationship between Brie’s Ruth and Gilpin’s Debbie. In the first season, they have plenty of ups and downs (probably more downs). After the season finale, it seems that things get reconciled.

Either way, their relationship is something that is seldom seen in a TV series. Brie points out the show turns the “will they or won’t they?” trope on its head by making it between two women in a friendship. “It was such an important part of the story for our characters,” she said.

Known for her roles in Community and Mad Men, Brie adds that she appreciated how the show was a “big swing” and how it was different from anything she has done before. She really wanted to “shake it up.”

Gilpin shared the same sentiment, saying she has always auditioned for basic roles like “jargon neighbor” or “exposition wife.” She adds, “Seeing maniacal barbie people in drag queen makeup, I was like. ‘[That’s] my greatest dream.’ “