Continue to Deadline SKIP AD
You will be redirected back to your article in seconds
Skip to main content
November 7, 2018 4:00pm 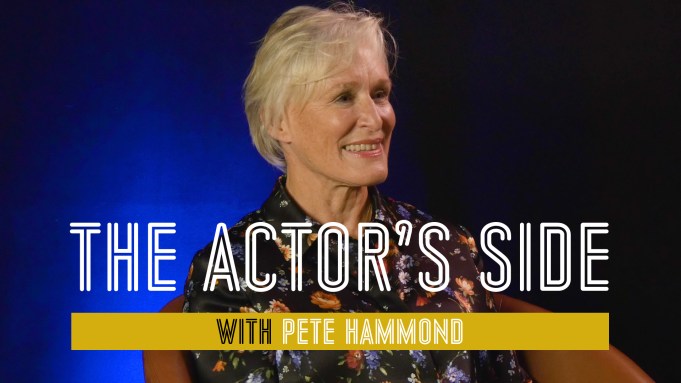 Glenn Close has been nominated for an Oscar six times but has never won. Many pundits think this egregious oversight just might be rectified this year with her performance in The Wife, the story of a woman largely responsible for the literary works that actually won her husband (played brilliantly by Jonathan Pryce) the Nobel Prize. With Oscar-nominated turns in films like The World According to Garp, The Natural, The Big Chill, Fatal Attraction, Dangerous Liaisons and most recently as a woman posing as a man in 2011’s Albert Nobbs (which represented her first nomination in 23 years), she can be assured, if there is any justice, of a seventh nod for this fierce and timely turn.

Close, currently starring at off-Broadway at The Public in Mother of the Maid from Jane Anderson (who also wrote The Wife), visited our Deadline studio for an appearance on my video series The Actor’s Side, where we not only talked about her most current film but also her early days and inspiration to act when she was just a kid growing up, as well as some of the iconic roles for which she still gets stopped in the street (if you guessed Cruella in 101 Dalmatians and Alex in Fatal Attraction, you are batting .1000).

She also speaks of her pride at the large number of women behind the scenes of The Wife, as well as the casting of her daughter Annie Starke to play the younger version of her character in the film. Close regularly shuttles from stage to movies to television and has a mantel full of Tonys, Emmys and Oscar nominations among others to show for it. Earlier this week she was named Hollywood Actress of the Year for The Wife, something I imagine will be the first of many accolades in the months to come.