Continue to Deadline SKIP AD
You will be redirected back to your article in seconds
Skip to main content
January 8, 2020 6:00am
1Comments 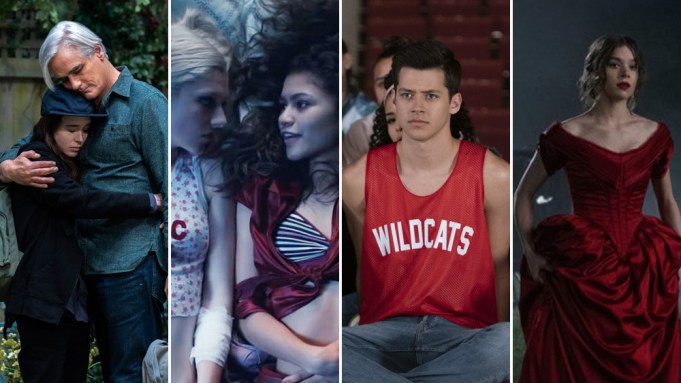 The 31st Annual GLAAD Media Awards nominees were unveiled this morning and Netflix leads the pack with 15 nominations while HBO coming in second with eight. New streaming Disney+ and Apple TV+ receive their first nominations with High School Musical: The Musical: The Series and Dickinson respectively. The GLAAD Media Awards recognizes the various avenues of media for their fair, accurate, and inclusive representations of the LGBTQ community and the issues that affect their lives. It is two-part, bi-coastal affair with the first ceremony taking place in New York at the Hilton Midtown on March 19 and the second in Los Angeles at the Beverly Hilton on April 16.

“There are more nominees for the 31st Annual GLAAD Media Awards than ever before not only because  LGBTQ diversity and inclusion has progressed, but because GLAAD’s work to forward LGBTQ visibility has never been more important,” said Sarah Kate Ellis, GLAAD President & CEO. “Media stories and storylines that shed light on LGBTQ people of different backgrounds, genders, races, religions, and more, are needed to counter the current politically and culturally divisive moment. The GLAAD Awards this year not only celebrate new LGBTQ stories that educate, entertain, and affect positive cultural change, but remind LGBTQ people and allies that in an election year, our visibility and voices have never been more important.”

HBO received eight nominees while ABC, CBS, and NBC each earned four nominations. The TV nominees include Schitt’s Creek, Euphoria, Killing Eve, Batwoman, The L Word: Generation Q, Pose, Brooklyn Nine-Nine, Dear White People, One Day at a Time, Superstore, Vida, and Tales of the City. On the film side, Bombshell, Booksmart, Rocketman, Brittany Runs a Marathon Adam, Portrait of a Lady on Fire, Pain & Glory, Gay Chorus Deep South and Wig are among those who were recognized.

For the first time since the 24th Annual GLAAD Media Awards, GLAAD will hand out a trophy for Outstanding Broadway Production. The advocacy group will also honor Ryan O’Connell and his comedy series Special. A special recognition award will be given to LGBTQ journalists Karen Ocamb and Mark Segal.

Read the complete list of nominations below and the video of nominees above..

Outstanding Reality Program
Are You the One? (MTV)
Bachelor in Paradise (ABC)
I Am Jazz (TLC)
Queer Eye (Netflix)
RuPaul’s Drag Race (VH1)

Outstanding Newspaper Article
“L.G.B.T.Q. Community Finds ‘Sense of Home’ in the Bronx” by Rick Rojas (The New York Times)
“Military Reports No Discharges Under Trans Ban — But Advocates Have Doubts” by Chris Johnson (Washington Blade)
“Nearly 4 Million LGBTQ People Live in Rural America, and ‘Everything is not bias and awful’” by Susan Miller (USA Today)
“Texas Leads the Nation in Transgender Murders. After the Latest Attack, the Dallas Trans Community Asks Why” by Lauren McGaughy (The Dallas Morning News)
“Trump Pledged to End the HIV Epidemic. San Francisco Could Get There First” by Maria L. La Ganga (Los Angeles Times)

Outstanding Digital Journalism Article
“Finding the Truth About Transgender Athletes in Women’s Sports” [series] by Cyd Zeigler, Dawn Ennis (Outsports.com)
“How a New Class of Trans Male Actors Are Changing the Face of Television” by Trish Bendix (TIME.com)
“’This time is real’: Taiwan Counts Down to Asia’s First Same-Sex Weddings” by Beh Lih Yi (Openlynews.com)
“Trump Administration to LGBT Couples: Your ‘Out of Wedlock’ Kids Aren’t Citizens” by Scott Bixby (TheDailyBeast.com)
“When Transgender Travelers Walk Into Scanners, Invasive Searches Sometimes Wait on the Other Side” by Lucas Waldron, Brenda Medina (ProPublica.org)