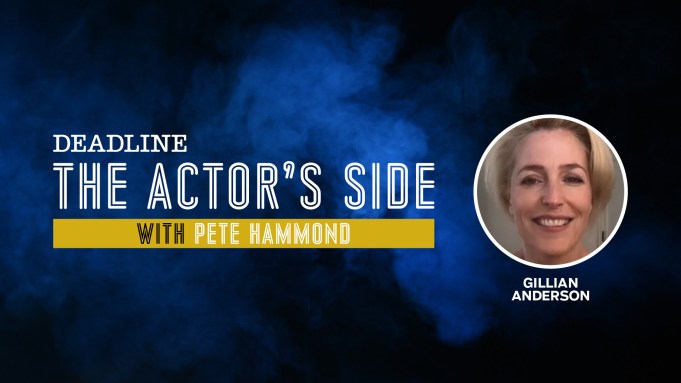 Gillian Anderson won SAG, Golden Globe and Critics Choice awards for her role as British Prime Minister Margaret Thatcher in The Crown, and now she has been nominated for a Best Supporting Actress in a Drama Series Emmy as well. And in a large field of eight contenders including two co-stars from The Crown (Helena Bonham Carter, Emerald Fennell) and four stars of The Handmaid’s Tale, she is the heavy favorite over at our sister site Gold Derby to take this prize as well.

Anderson is no newcomer when it comes to Emmys. She was nominated four times as Lead Actress for her eponymous role of Dana Scully in The X Files, and winning in 1997, and nommed again for Lead Actress in a Miniseries or Movie for Bleak House in 2006. But it has been 15 years since the Emmys last acknowledged this versatile star, and it is a good bet that playing a real-life figure will bring her to the winners circle for a second time. Playing Thatcher certainly didn’t hurt Meryl Streep, who won her third Oscar for The Iron Lady, but Anderson did not consider that when taking on this role, or even reference it think about it, just as she didn’t think about Vivien Leigh when she did a production of A Streetcar Named Desire. She went her own way and found some fascinating inroads into playing her as she explains when she joins me for today’s edition of my Deadline Video Series, The Actor’s Side.

We begin the interview going way back to her unconventional youth, and I reminded her she was voted “most likely to get arrested” — a prediction she proudly says came true, however briefly, But had she been voted “most likely to win awards,” they really would have been right, as she discusses what they mean and how nice getting this Emmy nomination now is considering it has been many years in between. She talks about the challenges of playing Thatcher, some key advice creator and writer Peter Morgan gave her and how this American-born star’s considerable time living in England might have influenced her portrayal of Thatcher. Of course we also talk about the continuing popularity of Scully and Mulder and The X Files, plus her currently shooting role as another icon, Eleanor Roosevelt, in First Lady, and so much more. To watch our conversation and to get the “actor’s side” from Gillian Anderson, just click on the link above.