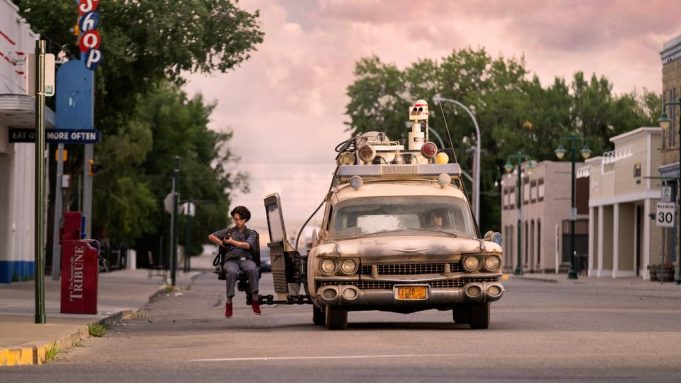 Sony is serious about keeping spoilers at bay for its upcoming November 19 holiday release, Ghostbusters: Afterlife.

Even before you could leave the theatre at yesterday’s media screening in L.A. which was timed to coincide with a surprise simultaneous screening at New York’s Comic Con, the studio urged no spoilers. Sony, knowing what they have with this reboot of the 1984 blockbuster, also sprung a surprise screening on the CinemaCon crowd over the summer.

After the most recent disappointing reboot of the franchise, Paul Feig’s female-driven 2016 version (not to mention countless television series iterations), this new spin gets it soooooo right, using a different and far more engaging female character at its center, and as director and co-writer (with Gil Kenan)  Jason Reitman said in a video that played before the film, “this is a family affair.”

And indeed it is, with his father, Ivan Reitman, on board as producer. Ivan, of course, directed the original and its 1989 sequel, and as Jason says, was sitting right there in his director’s chair next to his son throughout filming. So clearly, considering the giddy joy of this 2021 pandemic-delayed take, the answer to ‘Who You Gonna Call?’  – to get it done with the kind of style fans deserve, would be the Reitmans, particularly Jason, who grew up in the shadow of Ghostbusters (he was six when his father made it) and indeed, gets it.

Actually, as much as the plot here is plucked from the Ghostbusters Universe, the style Jason Reitman has employed is actually just as much a throwback to vintage Spielberg, putting young people in the forefront of the new edition. Here, the focus isn’t on a team of Ghostbusters like the original and its sequel with Bill Murray, Dan Aykroyd, Harold Ramis, and Ernie Hudson. Nor is it trying to be woke, with an all-female team that included, among others, Melissa McCarthy, Kristen Wiig, and Kate McKinnon (without even bothering to rename the movie – how about Ghostbusters: MeToo?). Smartly, it is all about the kids, particularly a 12-year-old girl named Phoebe (McKenna Grace), who is key to everything here. In fact, Reitman says he was inspired, after a successful career branching away from his dad’s legacy into his own significant indie filmography (Up In The Air, Thank You For Smoking, Juno etc), with the kernel of an idea, where a young girl finds an old proton pack in a barn. That is exactly what happens here, as Phoebe discovers the link to what turns out to be her grandfather’s legacy, one that leads to her own ghostbusting adventure that perfectly merges with the family business, as it were.

After an opening sequence that sets up a bit of ghostly mystery, we meet single mom Callie ( a fine Carrie Coon) and her two kids, Phoebe and gawky 15- year-old brother, Trevor (Finn Wolfhard). At her wits end, broke, and evicted from their home, she takes the kids to an isolated part of Oklahoma, where a dilapidated old house sits alone, with signs around indicating the end of the world is coming.

What the kids don’t know is that this is to be a permanent move. Callie has no choice, even if this rundown haunted house is worth nothing, according to the realtor (Annie Potts, who was in the original). As it turns out, this was the home of her father, Dr. Egon Spengler (the character played by the late Harold Ramis).

He has now died, but remnants of his life and past experiences as one of the legendary ghostbusters who saved New York City in the 80’s are still there hidden away. Leave it to the kids to slowly discover the treasure trove of equipment, even the infamous Ecto-1 that has seen better days, as all of it leads to new discoveries of the paranormal right there in this dead-end town in America’s heartland.

In this adventure, the kids are joined by a lively local kid nicknamed Podcast (scene stealer Logan Kim in his first movie), who is so into metaphysical things he fits right in as a companion to Phoebe’s cause. And so does Lucky (Celeste O’Connor) the strong-willed daughter of the Sheriff that Trevor falls for. Also figuring heavily into all this is local teacher Mr. Grooberson, played charmingly by the inimitable Paul Rudd. Perfect casting here, as a local who basically shows his classes old VHS copies of horror movies like Cujo rather than bother teaching anything. “You don’t want to be here and neither do I,” he says to the middle school kids. He takes a liking to Callie, and that sparks a relationship, as well as his own eventual unlocking of long-hidden ghostly secrets. His scene in a spooky supermarket is an all-time keeper.

I will avoid describing much else, except to say you can see extended cameos from a host of Ghostbuster favorites, including Terror Dog and, yes, the Sta-Puft Marshmallow clan recreating, in brand new hilarious ways, perhaps the single greatest example of product placement in movie history. The special effects are again dynamite here, and the cast just could not be better, with Grace leading the way. She is terrific in her nerd-like quest to find her own legacy and worth, as she uncovers that of her late grandfather’s.  Dan Aykroyd’s presence on the credits as Executive Producer may offer some other clues about the supporting cast, but rest assured, the cameos here are choice. The film’s dedication at the end “For Harold” is a lovely tribute to Ramis, who died in 2014.

Perhaps the real star here is Jason Reitman who, like Phoebe, rediscovers and reinvents his own family cinematic legacy, and in doing so, provides a warm, funny, exciting, nostalgic, emotional, and altogether winning return to the pure joy of that 1984 classic by making something that also seems very new in all the right ways. Check out the trailer above to see scenes from the movie.

Do you plan to see Ghostbusters: Afterlife? Let us know what you think.