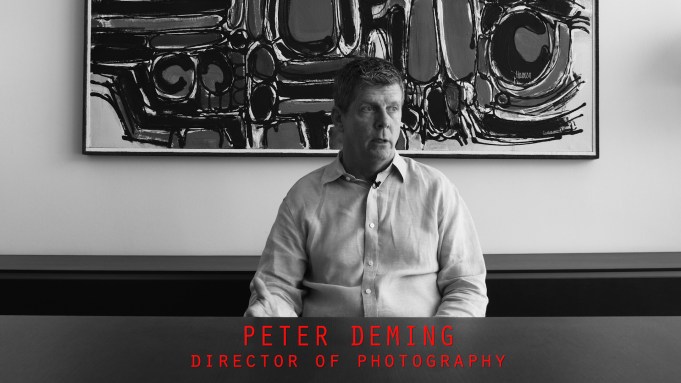 Director of photography Peter Deming, who shot the entire 18-episode series of David Lynch’s Twin Peaks: The Return, has been working with the Los Angeles-based auteur since his ABC summer comedy series On the Air. In addition, Deming has worked on Lynch’s HBO series Hotel Room and the movies Lost Highway, Inland Empire and Mulholland Drive (when it was built for TV, and what ultimately became an Oscar-nominated film).

With Twin Peaks: The Return Deming has notched his first Emmy nomination for outstanding cinematography in a limited series or movie, and it’s for the series’ most audacious episode, Chapter 8, a mostly black-and-white oasis that veered off from the series’ storyline of FBI agent Dale Cooper’s dopplegangers and featured such existential imagery as the test of the Atom bomb, an evil vagrant who crushes people’s heads and recites poetry, and the innocence of the 1950s (kids out on a date) and its evils (ya know, a frog moth crawling out of a little girl’s mouth).

What did the entire episode mean? No one knows, but it’s complete Lynch: An homage to his works from Blue Velvet, Lost Highway and Eraserhead, and a possible explanation as to how all the evil originated in Twin Peaks in the first place (there’s an indication that the episode is about the birth of the evil spirit Bob). Episode 8 was shot in color but delivered in black and white, the latter treatment used by Lynch on such pics as Eraserhead and Elephant Man.

A big shot homage we see in Twin Peaks: Return to Lynch’s previous work: The dark and winding road–most likely in the Hollywood Hills–which was seen previously in Wild at Heart and Lost Highway. And that’s exactly what it literally is, Deming tells us in regard to the image’s greater symbolic meaning.

“David doesn’t do a lot of takes — three, maybe four,” says Deming in the latest edition of Deadline’s video series Production Value. “We’d shoot scenes on the new show in one or two shots.” That said, Lynch doesn’t pre-prop a lot of shot lists. “He doesn’t want to be constrained,” says Deming about the filmmaker.

Despite critics drawing parallels between Alfred Hitchcock and Lynch’s earlier work, the Blue Velvet director isn’t about calling back others’ work in his own. When Deming worked with Lynch on Lost Highway, he asked the director if there were any previous films or visuals that inspired him.

“He said, ‘This movie should look like this movie, it shouldn’t ape any other movie, or borrow from someone else.’ “

Check out more of our conversation above.