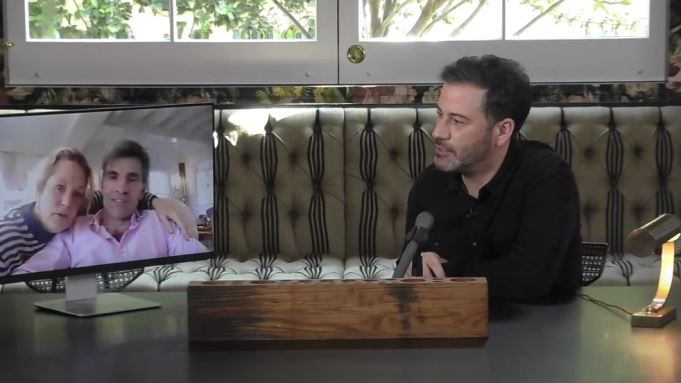 Good Morning America anchor George Stephanopoulos and his wife, actor Ali Wentworth, appeared on Jimmy Kimmel Live’s home edition Tuesday and gave an update on their status after both were diagnosed with coronavirus.

Stephanopoulos said Monday on GMA that his test results came back positive for COVID-19 as he has been caring for Wentworth as she recovers from the virus. He told Kimmel that he did not show any symptoms except for a sore back about three weeks ago. He has continued to anchor the ABC morning show from his home’s dining room, alongside Wentworth and their two daughters.

Wentworth had it much worse, quarantined in her bedroom for 16 days.

“It’s very indicative of our lives,” she told Kimmel. “I get corona and I’m deathly ill for three weeks with a high fever, and sweating and aching and going crazy like Martin sheen in Apocalypse Now!, and George gets it and he has no symptoms.”

Wentworth said she was “basically sleeping and taking Tylenol PM” and that she watched all seven seasons of Mad Men during her isolation, while Stephanopoulos helped by bringing her food and lemonade.

Both seemed in good spirits during the interview, in which Stephanopoulos and Kimmel joked about having to do their own hair in this time of production shutdowns.

“I know that typically at your workplace you’ve got three people,” Kimmel quipped to Stephanopoulus. “You’ve got one person who does your hair and one for each eyebrow, yes?”

Chuckled Stephanopoulus in response: “Well, they take a lot of work.”

Check out the segment above.