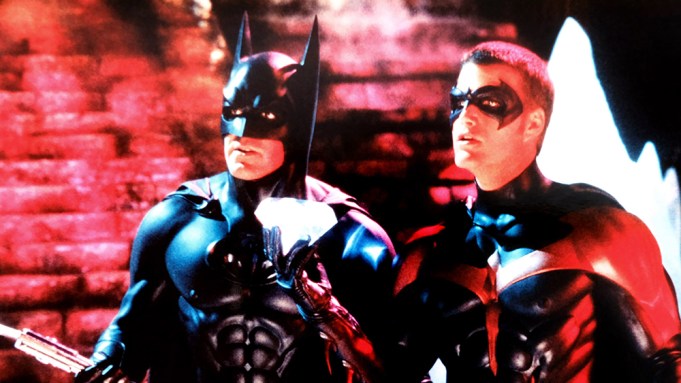 Batman rarely misses his targets when he’s battling to save Gotham, but George Clooney said he dropped the ball big time with his performance as the caped crusader in Joel Schumacher’s Batman & Robin.

The Catch 22 and Midnight Sky star sat down with Howard Stern and Robin Quivers to chat about his friendships with other Hollywood figures and his experience on the infamous 1997 flop, which he said he can’t bear to watch.

“It’s so bad that it actually hurts to watch,” Clooney said on The Howard Stern Show. “You’ll be flipping the channels and it’ll just pop up and I’m like ‘Oh no, no, no.'”

During the talk show segment the Oceans actor also said that, given his own experience playing out the masked hero, he tried to sway current Batman Ben Affleck from taking on the role. Clooney said that upon receiving the offer, Affleck turned to him for advice. However, despite his warnings, Affleck put on the cape and “ended up doing a great job and I was wrong,” Clooney said.

While he expressed that he intends to stay away from the decades-old project when possible, Clooney says there’s nothing he could have changed about his performance, given it was one of his earlier works.

“It’s a big machine, that thing,” he said. “At that point I was just an actor getting an acting job, I wasn’t the guy that could green light a movie.”

Clooney, however, isn’t the only Batman & Robin team member who holds disdain for the failed project. He shared that Oscar-winning scribe Akiva Goldsman, who penned the script, knows it was a “terrible screenplay.” He added that Schumacher was also in on the film’s flaws.

“We all whiffed on that one,” Clooney concludes the segment.