Continue to Deadline SKIP AD
You will be redirected back to your article in seconds
Skip to main content
October 13, 2021 9:00am 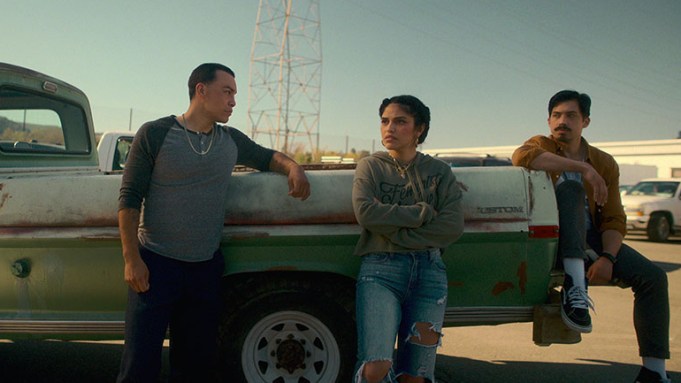 The Morales cousins (J.J. Soria, Karrie Martin Lachney, and Carlos Santos) are back for Season 2 of Netflix’s Gentefied and as they’re fighting to keep their grandfather Pop’s (Joaquín Cosío) from being deported back to Mexico, the trio is dealing with drama galore. The first trailer can be watched in full above.

The series, from creators Marvin Lemus and Linda Yvette Chávez, follows East Los Angeles Latinos on their respective and collective search for the American Dream.

Season 2—premiering Nov. 10— picks up after the emotional debut season’s finale that saw Erik Morales (Soria) and his girlfriend Lidia (Annie Gonzalez) welcome their daughter, Delfina. Amid all the happiness, Erik realizes his grandfather Pops (Cosio) is missing from the hospital celebration because he’s been arrested on an outstanding warrant and his beloved pick-up truck is being impounded.

Pops is now free and staging a fight to stay in the United States armed with the help of his social media fans and his attorney Melinna Barragan (Melinna Bobadilla). But will that be enough?

As the trailer reveals, he is also reunited with his companion Lupe (Alma Martinez) who is still waiting for his dead wife’s approval so they can take their relationship to the next level.

Speaking of love, there’s a budding relationship ahead for Chris Morales (Santos), the chef of the family whose talents could take him well beyond the neighborhood. Sparks fly when he meets Sarai (Ivana Rojas), a strong Latina with big dreams who is running her own food truck.

His cousin Ana Morales (Martin) continues to mend a broken heart after her split from Yessika (Julissa Calderon) whose icy demeanor pushes Ana into the arms of someone new.