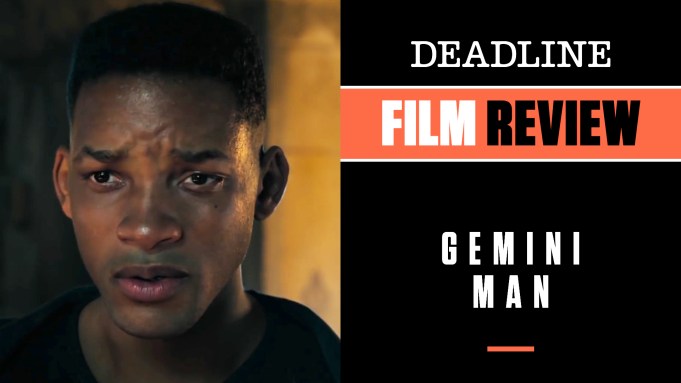 It is old Will Smith vs. young Will Smith in Gemini Man, a globe-trotting action thriller that uses technological razzle dazzle to hide the fact that it is really just a routine clone of the Jason Bourne movies and all their imitators.

That makes sense since it has been in development for two decades, with a number of major stars rumored to take on the role of key government assassin Harry Brogan. It finally went to Smith once the filmmaking team cracked the code of de-aging its star and effectively giving us two — count ’em! — Smiths for the price of one. The actor actually is quite game in the role(s), never missing a beat in convincing us his 25-year-old exact clone is on the hunt to do away with his 51-year-old doppelganger. It’s the script credited to Billy Ray, David Benioff and Darren Lemke (from the latter pair’s story) that can’t keep pace.

The plot, dopey as it is, has Brogan’s old Army buddy Clay Verris (Clive Owen), now running his own private assassin business, secretly extracting a sample of Brogan’s DNA 25 years earlier and creating a test tube version of the master sharpshooter, bringing him up as his own adopted son named Junior. The goal is simple, create the best in the world and then do away with the guy who really is the best there is. This sets up one chase and perilous situation after another across a number of locales including Colombia, Hungary and Georgia as Junior pursues his prey — himself (sort of).

Along for the ride is Brogan’s fellow Defense Intelligence Agency colleague, Danny (Mary Elizabeth Winstead), and for laughs, their pilot Baron (Benedict Wong). Brogan’s ideal plan of retiring to a small village to fish all day is rudely interrupted when Verris’ plan starts to take shape and he is called back into action. And there is lots of that in store for audiences content to watch Smith vs. Smith going for each other’s jugular.

In the past year we have seen a number of films using the de-aging technique on their stars, including Michael Douglas in Ant-Man and Avengers movies, as well as Samuel L. Jackson in Captain Marvel to name two examples that were somewhat jarring. In the upcoming The Irishman, the technology is used to greater success in wiping 30 years off Robert De Niro, Joe Pesci and Al Pacino. Lee has been a leader in breaking the mold in storytelling through the use of advancements in filmmaking tools, such as the extraordinary, Oscar-winning 3D effects in his Life Of Pi and less successful with higher frame rates in the abysmal Billy Lynn’s Long Halftime Walk. This is, at least as a popcorn picture, a step from the latter. Lee incorporates those technologies as well; mix that in with the yeoman-like effort to make Smith believably youthful again, and voila! — you have the future of movies. Except unfortunately he forgot what was so great about movies of the past: the content. Instead what we get here is a by-the-numbers thriller with a lot of bells and whistles. It is entertaining on a base level, but for all the effort you might hope for something a little less forgettable.

My pet peeve: As with Billy Lynn, the use of the higher frame rates simply does not work for me, instead making this big-screen movie look more like a live television drama, so photoreal that it comes off as unreal in a movie theatre. It is distracting to say the least, and quite frankly not worth the money or trouble it took to achieve the effect. Saddled with 3D glasses and a star who dominates every frame, it is a lot to ask of the audience.

Smith, however, isn’t the problem; rather, he is the best reason to see this as he is totally game and acquits himself nicely throughout. Winstead is a welcome presence, as is Wong for his usual comic relief, but Owen is strictly one-dimensional in the villain role. For a director who has given us the likes of Crouching Tiger, Hidden Dragon, Life of Pi, Brokeback Mountain and so much more, you just hope he finds some better scripts to experiment with next time.

Producer is Jerry Bruckheimer. David Ellison, Don Granger and Dana Goldberg. Paramount releases it Friday. Check out my video review at the link above with scenes from the film included.

Do you plan to see Gemini Man ? Let us know what you think.