Continue to Deadline SKIP AD
You will be redirected back to your article in seconds
Skip to main content
September 17, 2020 7:00am
7Comments 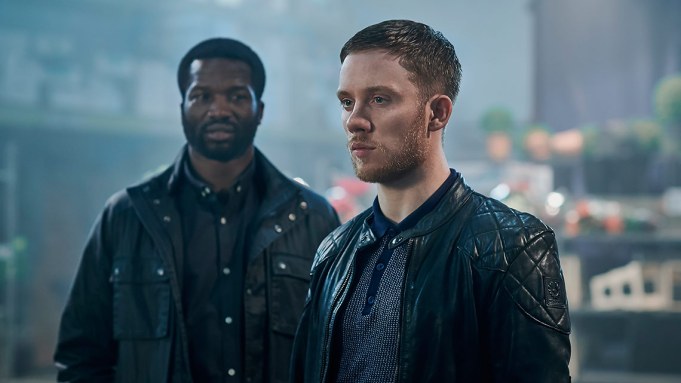 AMC has unveiled the trailer for its upcoming crime series Gangs of London. Starring Peaky Blinders alum Joe Cole, Colm Meany, Michelle Fairley and Paapa Essiedu (of Michaela Coel’s I May Destroy You), Gangs of London follows the explosive power dynamics between the multicultural city’s international gangs when the boss to beat dies.

“We’re born into a certain world, it’s chosen for us,” Meany’s gang lord Finn Wallace tells his son Sam (Cole). “Some might think it’s brutal but I say it’s glorious.”

When his father becomes the unlucky victim of a secret assassin, Sam must climb the ranks to maintain his family’s notorious glory. But upon hearing news of the young man’s criminal ascent, tension from rival gangs rise as they seek to usurp the Wallace family for power.

The Dumani gang, led by Essiedu’s Alexander and Lucian Msamati’s Ed, seeks to take control over what they’ve been denied for years.

“We’re met as illegitimate children of the Great British Empire. A city of closed doors, by the time we’re done, there would not be one single door that we could not get behind,” warns Ed over sprawling shots of London’s bustling streets and iconic landmarks.

The trailer for the 10-episode season sees Sam teaming up with stranger Elliot Finch (Sope Dirisu) to ward off those seeking to complicate the heir’s rise to leadership and control. Once a low-life Londoner obsessed with Sam’s criminal family, Finch gets an inside look at the ugly inner workings of the city’s gangs.

“I’m not interested in peace,” a disembodied voice says as Finn Wallace kills his last victim.

Gangs of London, which has been renewed for a second season, is set to start streaming on AMC+ starting Oct. 1.

Gangs of London is created by Gareth Evans and partner Matt Flannery. The AMC+ series is produced by Pulse Films in association with SISTER for Sky Studios. The series was executive produced by Pulse Films’ founder Thomas Benski, and Lucas Ochoa alongside Jane Featherstone for SISTER and Gabriel Silver for Sky Studios. AMC will serve as co-producer for the second season.