Continue to Deadline SKIP AD
You will be redirected back to your article in seconds
Skip to main content
April 19, 2019 2:43pm
1Comments 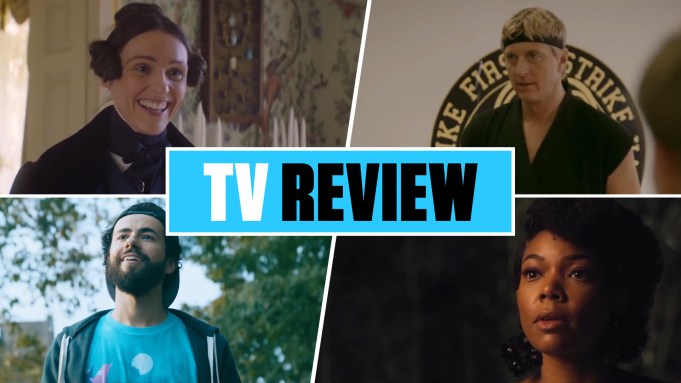 The start of the NBA playoffs and the deeper dive into the final season of Game of Thrones may be Must See TV right now, but neither are the only game around.

With the debut of Hulu’s Ramy today, the April 22 U.S. premiere of Gentleman Jack on HBO, the long-awaited April 23 feature-length series finale of BET’s Being Mary Jane and the return of Karate Kid spinoff Cobra Kai on YouTube Premium on April 24, there’s a lot to choose from this week on the small and smaller screen.

Those choices will result in a final decision on what is the show you have to see this week, as revealed in my video review above.

However, before we get to that, a happy and peaceful Passover and Easter weekend to all here in Hollywood and beyond.

Having debuted earlier on Hulu, Ramy is a dramedy that shows both a very different and a very familiar America. Set in the Sopranos state of New Jersey, the first season of the series co-created by and starring Ramy Youssef spotlights the contradictions, banalities and expectations of a millennial Muslim-American living the Garden State dream, sort of. Jerrod Carmichael joins Youssef, Ari Katcher and Ryan Welch as an executive producer in the 10-episode first season.

With insight and humor ranging from Ramadan to the restroom and back again, the series about the son of Egyptian immigrants is an attempt to “make something about a group that people don’t know, that is self-reflective instead of something that is trying to project an idea of what you should think of us,” Youssef told me at our The Contenders Emmys event on April 7.

The BBC co-produced Gentleman Jack opens up new terrain for HBO with original programming on a Monday. From the pen of Happy Valley creator Sally Wainwright and based on the now decoded real-life 19th century diaries of the very unconventional in almost every way Anne Lister, the period drama is a relentless pursuit of status, wealth and love. With Doctor Foster alum Suranne Jones as Lister and Bodyguard vet Sophie Rundle as the wealthy Anne Walker, it is also a tale about who is the huntress and who is the hunted.

Back for the first time since September 2017 and delayed at the last minute from its original airdate this week, the April 23 series finale of Being Mary Jane is a bookend in more than one way for the BET show. Having started as much-watched feature length offering in 2013, BMJ made it through four seasons on the Viacom-owned outlet with newly anointed America’s Got Talent judge Gabrielle Union in the lead as TV journalist Mary Jane Paul.

Also back for more this week on April 24 is Ralph Macchio and William Zabka’s battle of the dojos in Cobra Kai. Picking where the YouTube Premium series’ first season left off, this new run on the 35th anniversary of the first Karate Kid flick sees the movie’s Martin Kove joining as a series regular after an extended cameo last season on the series created by Jon Hurwitz, Hayden Schlossberg and Josh Heald.

So crane kick that and step onto the mat to take a look at my review to learn what is the show you have to watch this week.