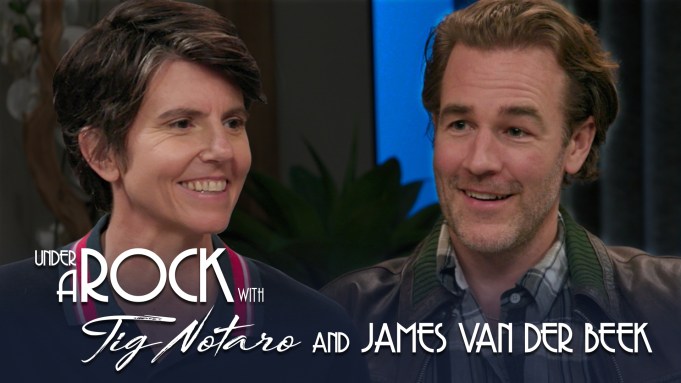 Funny Or Die premiered a new talk show today with comedian and actress Tig Notaro. The new series is a celebrity talk show with Notaro as host — but her knowledge of TV, film and famous people is really bad. That’s why the new series is titled Under A Rock with Tig Notaro.

The first episode (which you can watch above) premieres today and will continue for the next five weeks. In each episode, Notaro sits down and interviews six highly recognizable celebrities  — except she legitimately has no idea who her famous guests are. As the show goes on, she has to attempt to figure out each guest’s identity, with hilarious and humbling moments along the way for both guest and host. Amazon Alexa is also on hand to help Tig with anything she needs. In the video above, you can see Notaro try to decipher who James Van Der Beek is — and it is quite entertaining.

Under a Rock with Tig Notaro is produced by Funny Or Die and Notaro & Stephanie Allynne’s production company Something Fierce. The series is directed by Amy Landecker. New episodes will be released every Tuesday through July 9, on FunnyOrDie.com and on Funny Or Die’s social media platforms. The project was created in partnership with Endeavor Global Marketing as part of their work with Amazon Alexa.

Notaro is a stand-up comedian, writer and actor. She currently appears in Star Trek: Discovery on CBS All Access as Commander Jett Reno. She also co-created the semi-autobiographical Amazon Prime series One Mississippi alongside Diablo Cody and appeared in Paramount Pictures comedy Instant Family. She has also been on numerous talk shows including Ellen, The Late Show with Stephen Colbert and Conan.

She is repped by Integral Entertainment, ICM and Zifferan Brittenham.