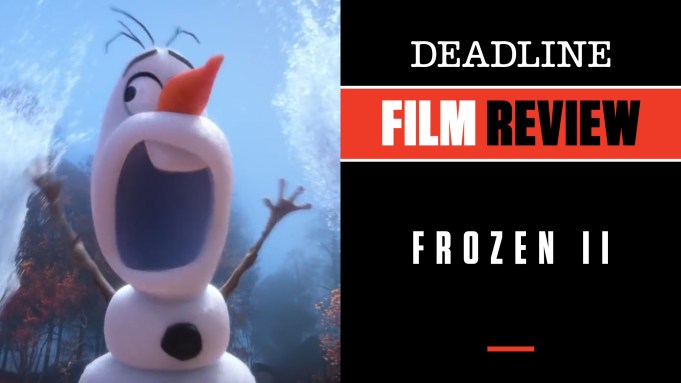 It is hard to believe, but the new sure-to-be holiday blockbuster Frozen II is the first theatrical sequel to a Disney animated musical, and fans have been waiting six years for this event. So does it live up to the hype and the expectations? Well, pretty much. It is always hard to top an original as enormously popular as this one was, but the creative team led by directors Jennifer Lee and Chris Buck, with a script by Lee and snappy songs again by the Oscar-winning team of Robert Lopez and Kristin Anderson Lopez, have given it the old college try and succeeded admirably for the most part.

This is actually a darker take than the first one, and it does try to expand the story that seemed so self-contained, by exploring the reason Snow Queen Elsa got her superpowers in the first place, and how how her and younger sister Anna’s parents disappeared into the sea never to be seen again. Plus lots of other details, and some new characters from the past that show up in the present, notably Sterling K. Brown’s Lt. Col. Mattias.

However, the real attraction here is the fact Disney has gotten the whole band back together including of course Elsa (voiced by Idina Menzel), Anna (Kristen Bell), scene-stealer snowman Olaf (Josh Gad), Kristoff (Jonathan Groff) and the lovable Sven. These simply put are wonderfully appealing characters, and that above all else is what warms up the Frozen franchise and makes it tick. Kristoff’s foiled attempts to propose to Anna are nice touches here, too, helping to give the proceedings both a comical and romantic tone. This time the gang is leaving home in Arendelle and off to the mysterious enchanted forest in order to get to the origin of Elsa’s powers and fight to save their own magic kingdom of course. Isn’t that always what these things are about?

Nevertheless, routine plotting aside, this is all just an excuse to make the first movie again essentially, but the filmmakers have not stinted on ratcheting up the gorgeous animation — particularly in water scenes.  This is just first-rate animated movie-making, no question about it. It is a beautiful sight to see and reason enough to revisit this world that made a billion-plus bucks in 2013, and likely will do so all over again.

The cast is dynamite with Menzel again given big giant musical numbers in which she can let it go and belt them out as she has been doing since winning a Tony for Wicked. The songs they hand her this time are somewhat derivative of the Oscar-winning tune “Let It Go” that you can’t get out of your head no matter how you try. The signature song this time is “Into the Unknown,” and it is pretty much the same kind of thing. I actually liked Olaf’s amusing show-stopper “When I Am Older” and Kristoff’s catchy “Lost in the Woods” better. They seem more natural tunes for this ‘toon, to me at least. All the voice work is first rate, but Gad as Olaf owns every scene he is in, and he even gets a lovely dramatic moment as well (no spoilers here).

Peter Del Vecho is the producer. Disney opens it Friday.

Check out my video review of Frozen II above which includes scenes from the film. Do you plan to see the movie? Let us know what you think.