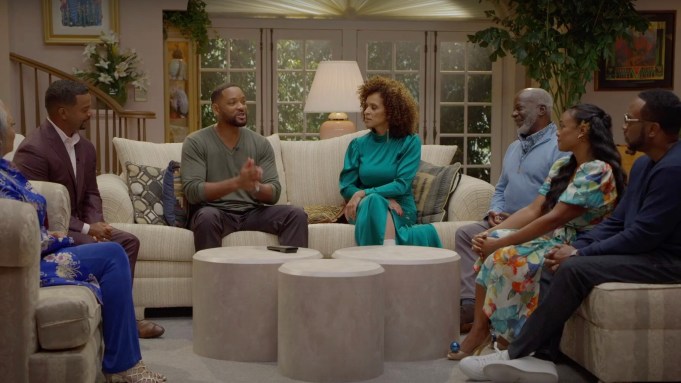 The Banks home is filled again. Will Smith posted the first trailer from the upcoming The Fresh Prince of Bel-Air Reunion, revealing that the special will debut on HBO Max on Thursday, November 19.

A highlight of the trailer features the surprise appearance of actress Janet Hubert, who played the NBC comedy’s original Aunt Viv and has, over the many years since, made her anger over the decision well known.

“I couldn’t celebrate 30 hears of Fresh Prince with Janet,” Smith tells the surprised other members of the reunited cast.

Taped on the 30th anniversary of the original series premiere date, the special also includes a candid sit-down chat between Smith and Hubert, their first in 27 years.

Produced by Westbrook Media, the reunion will launch exclusively on HBO Max on November 19. HBO Max is the exclusive SVOD home of the full original series library in the US, debuting on the platform when it launched in May. Marcus Raboy directs the special, which is executive produced by Rikki Hughes, who also serves as showrunner, as well as Miguel Melendez, Lukas Kaiser, James Lassiter, and Brad Haugen for Westbrook Media. Raphael Saadiq serves as executive music producer.

Check out the reunion trailer above.