Continue to Deadline SKIP AD
You will be redirected back to your article in seconds
Skip to main content
August 14, 2020 4:24pm
1Comments 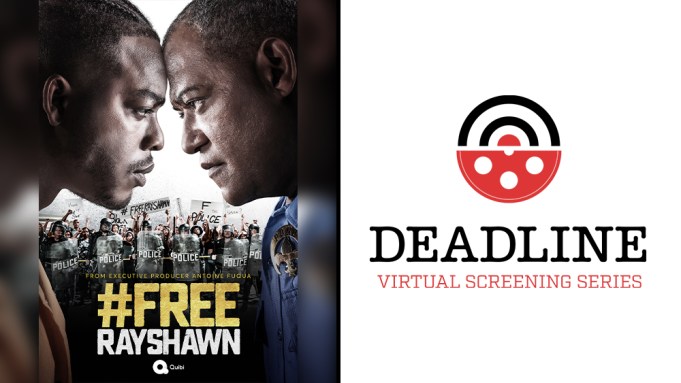 In the Quibi original drama #FreeRayshawn, from director Seith Mann and executive producer Antoine Fuqua, a young Black man is pursued aggressively by law enforcement officials for a crime he did not commit. It’s a sadly all-too-familiar story that addresses an issue many African Americans still face.

“It seemed like in a story that was so important and so striking, so timely,” said star Stephan James, whose title character is set up by New Orleans police on a drug deal. “I pride myself on doing things that speak to society and speak to life. This is one of those special projects that speak to life and speak to a circumstance that many young African Americans are facing a day.”

James was joined by Fuqua as well as co-stars Laurence Fishburne and Jasmine Cephas Jones for Deadline Virtual Screening Series.

With his life on the line, a frantic Rayshawn is forced to take refuge inside his apartment building with his wife and child and engages his social media followers in hopes of thwarting a police ambush.

“Social media has influenced so much today and using video to automatically almost feel like you’re there, and it’s triggering and to experience these experiences that a lot of victims go through and just to see it on screen in a way, and just to click like one click and all of a sudden, you see it in your face, it’s like you can’t run away from it,” said Jones, who plays Rayshawn’s wife, Tyisha. “The way Stephan’s character uses social media to gather an army around him to help him within like less than 24 hours, I thought, ‘That’s not really been done before.'”

Fishburne plays Steven Poincy, a sympathetic and seasoned cop who does his best to defuse the situation. The Emmy winner is no stranger to tackling material that highlights systemic issues that are prevalent in the Black community. Said Fishburne, “I’ve been telling this story for a long time,” he said. “My first feature film is a movie called Cornbread, Earl and Me. It’s about a young African American basketball player who’s got a full scholarship who’s about to go pro and he gets gunned down by the police in a case of mistaken identity. I did another movie that kind of works on the same theme, which is Boyz N the Hood.”

He continued: “I have to think of it in the way that the late John Lewis talks about his work is that it’s unfortunate in some respects that we have to continue to tell these stories, but I can’t get tired. … We can’t get tired as artists if this is the society that we are living in, and this is one of the ills of the society that we live in that is prevalent in that society. We have a responsibility and an obligation as artists to tell that story, to illuminate it, to try in some way, to remind people of their own humanity and all of us as human beings to really demonstrate if we can, the best of our humanity.”

Check out the rest of the conversation in the video above.