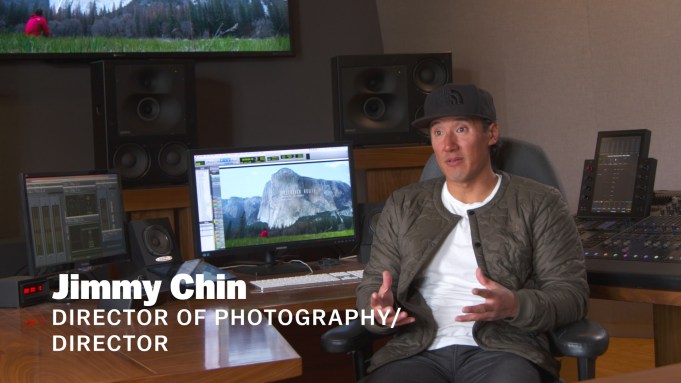 Cinematographer Jimmy Chin was one of three directors of photography on Nat Geo’s Oscar-winning documentary Free Solo, which breathtakingly and painstakingly charted Alex Honnold’s record-setting 2017 free climb of Yosemite’s El Capitan — the first person to ever accomplish the feat.

Honnold of course wasn’t the only one on the wall that day — Chin and his team climbed and shot right alongside, as he discussed in the latest episode of Deadline’s Production Value video series. The interview comes as Free Solo is getting Emmy buzz as befits being the reigning Oscar winner for Best Documentary Feature.

Chin said they while he and his team had prepped for the climb for months, “we also wanted to push everything we’d ever done on the wall … to kinda give people that sense of exposure that we thought would give it that extra feeling.” That included upgrading from smaller cameras used on typical climbing shoots, he said.

“We always discussed this as a big, cinematic film — we needed to shoot real cinema cameras on there with real glass,” he said. “Everybody on the team understands what that means: It just means we’re carrying three times as much weight.”

Chin said the team used Canon C300 Mark IIs with 17-120 mm lenses, full grips, battery and audio, all of which was assembled on the wall. “You’re literally hanging off the wall putting this thing together,” he said.

He also drills down on the planning and execution of the shoot, defining the entire operation as “Type 2 fun” — as in, it’s fun when it’s over.

“The biggest challenges of documentaries is you have no idea where the story is gonna go,” he said. “You can’t really write your way out of a problem — it’s happening in front of you, you kinda have to use a lot of your instincts and intuition and try to navigate how you’re gonna put this piece together. And hopefully, you’re pulling on the right thread that’s gonna kinda make this all work.