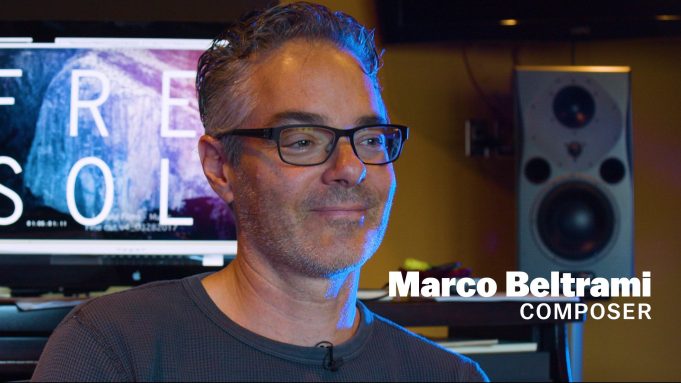 In his 25-year entertainment career, Marco Beltrami has scored a lot of horror films. Getting his big break as the composer for Scream, Beltrami went on to score three other entries in the franchise. More recently, the Los Angeles-based artist contributed his musical talents to A Quiet Place, and entered the genre space once more with André Øvredal’s anticipated adaptation of Scary Stories to Tell in the Dark. With all this experience in his past, and little interest in the “cheap scare,” Beltrami found the most petrifying project of his career in the unlikeliest of places—in the form of an Oscar-winning documentary from Elizabeth Chai Vasarhelyi and Jimmy Chin. Earning his first Emmy nomination precisely 20 years ago, Beltrami is back in the race this year with Free Solo.

Taking the world by storm last year, the National Geographic doc centers on Alex Honnold, an immensely passionate and equally gifted climber who prefers to work without ropes. Depicting Honnold’s historic summit of El Capitan, the documentary was gripping to Beltrami from the get-go. “Even though you know that Alex is fine, it’s hard not to get sucked into the fact of what he’s doing,” the two-time Oscar nominee explains, in the latest installment of Deadline’s Production Value video series. “And putting yourself in his shoes, it’s just insane.”

Risking his life repeatedly over the years, Honnold’s relationship to climbing could reasonably be deemed obsession. An artist honing his particular craft in a high-stakes world, the free solo climber is not unlike Beltrami, who sees each film like a puzzle that needs to be cracked, and finds it hard to rest until he’s done so. “Finding the acorn from which the tree of the score blossoms is the challenge of film scoring, and how that process works is still very mysterious to me,” Beltrami reflects. “In fact, if I think about it too much, I think I jinx it.”

In the case of Free Solo, two keys unlocked the puzzle. One was to summon the majesty of El Capitan; the other, to tap into the complexity of Honnold himself, rendering the basic paradox of his existence in musical form. “The thing that gives Alex life and vitality is also that thing that could possibly kill him. That dichotomy between this dark side that’s in him and this light side, I feel like that was always present, just in the way he talks,” the composer says. “He would get very depressed when he couldn’t climb, and he would be euphoric when he did things the way he wanted to, so that was something that struck me that I wanted to capture.”

To hear Beltrami discuss his approach to doing so, and the aspects of film composing that fuel his creative fire, click above.