Continue to Deadline SKIP AD
You will be redirected back to your article in seconds
Skip to main content
August 5, 2021 9:11am
9Comments 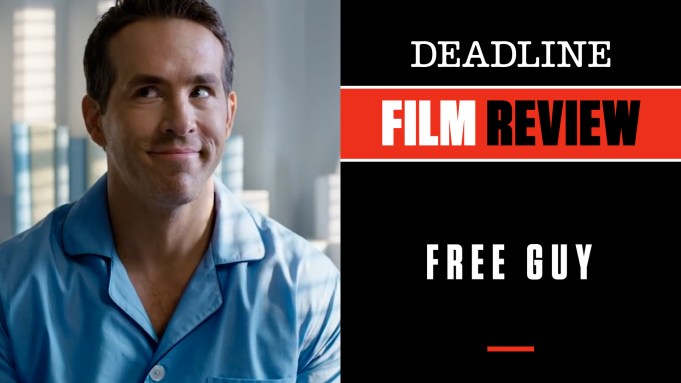 At first, not knowing a thing about this movie’s plotline, I was thinking it was a bit confusing and too gamer-oriented-smart for its own good, but once it kicked in for me — and boy, did it ever — I was smitten. I haven’t laughed this much in any film this year, and the timing couldn’t be more perfect right now for Free Guy, a refugee from 20th Century that has experienced Covid-delayed release in order for Disney to give it the full-fledged theatrical run it deserves. No $30 premium run on Disney+ for this!

It’s sort of a cross between Ready Player One and The Purple Rose of Cairo — you can throw in elements of films from Dog Day Afternoon to Tron and any number of crowd-pleasers — but Free Guy marches to its own drummer. And with Reynolds leading a terrific supporting cast including, and especially, Jodie Comer and Taika Waititi, Disney finally has the kind of winner the swallowing of 20th Century Fox can at least start to justify. Can you tell I really, really like this one?

Oblivious to the fact that he is not real but merely a character in a video game, Guy is a happy-go-lucky bank teller who stops by the Starbucks-type coffee shop for the identical order every day, also going through some other similar motions (some harrowing) repeatedly until he starts to go rogue. It begins with the daring move to change that coffee order, and that leads to a take-charge confrontation with the uber-violent stars of the chaos-rampant game and taking his newfound and bold “freedom” to the streets of Free City. A meeting with Molotovgirl (Comer), a cool-looking biker type, immediately sets off sparks for him, but she tries to explain to this increasingly viral “blue shirt guy” as he becomes known in the real world of gamers, that he is not real, but rather just essentially an extra in hostile anarchic city full of vandalism, killing and the stuff of hard-R video games. Guy becomes a symbol of new possibilities for the other background players.

Controlling the mayhem, or attempting to, are a pair of programmers working for Soonami Studios, the company behind the game. This would be Millie (also played by Comer, who is the avatar Molotovgirl), a sweet person who is also creative, as is Keys (Joe Keery). They are at odds with the mogul owner and numbers-obsessed Antwan (Waititi), who only has eyes for the sequel to “Free City” and more money, but first he commands his employees to fix the glitches that are turning the original into a haywire mess thanks to “blue shirt guy,” ordering them to get rid of Guy. Millie and Keys are seeing there is much more going on here and try to enable the change in Free City all without losing their jobs. The plot just builds from there as the titled Free Guy takes on new urgency, meaning and action.

To say much more would be to spoil the fun, and there is lots of it. Reynolds, when he connects with the right vehicle like this one, is a completely appealing talent born to play a role like this. Comer, an Emmy winner for Killing Eve, is super sexy and cool in the Molotovgirl role, while irresistibly sweet and smart as her alter ego Millie. Waititi manages to take the corporate villain role and somehow make every one of his lines much funnier than they might be in the hands of a less-inventive actor. Keery is perfect opposite Comer’s Millie as their budding mutual attraction mirrors what is going on in Free City with Guy and Molotovgirl. Lil Rel Howery is completely engaging as Guy’s BFF, the security guard at the bank, while Utkarsh Ambudkar scores points as Mouser, the kiss-ass No. 2 to Antwar.

Director Shawn Levy really makes this all pop onscreen while never letting the frenetic action overpower the true heart and populism in this tale. The screenplay is credited to Matt Lieberman and Zak Penn, the latter also responsible for Spielberg’s highly entertaining Ready Player One. Shout-out to the special effects team and all the artisans who bring it all to life. Producers are Reynolds, Levy, Sarah Schechter, Greg Berlanti, and Adam Kolbrenner. Check out my video review with scenes from the film at the link above. Disney releases it only in theaters (yes!) on August 13.

Do you plan to see Free Guy? Let us know what you think.