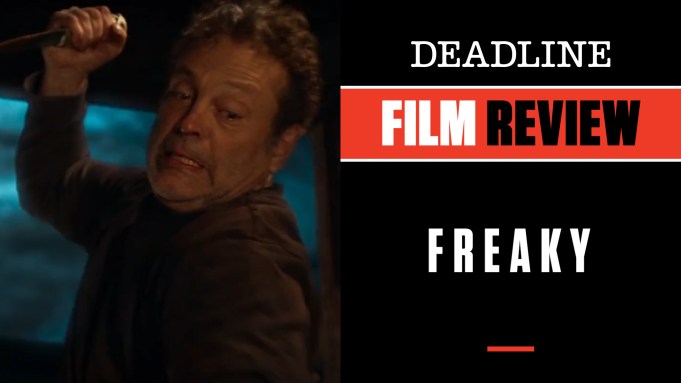 Universal and Blumhouse might as well have called their new horror slasher comedy Freaky the 13th. A blatant combo of Friday the 13th — even to the point of vividly making the connection in one early scene — and those mismatched-body-switching comedies along the lines of Disney’s Freaky Friday, this smart collection of laughs, gruesome killings and yes, heart, defies the tired nature of the genres it is aping and proves to be a breath of fresh air where it is least expected.

The premise is simple. Vince Vaughn, buried behind a Jason Vorhees-style mask for the first few scenes where he plows through a quartet of high school teens by carving them up in innovative ways, plays a feared serial killer called the Butcher. His face finally is revealed when he whips off the mask as he moves in on his new prey, attractive but self-doubting teen Millie (Kathryn Newton). She is attacked on a late night on the football field but somehow survives and exchanges blood with the Butcher — enough to set the switch in motion. Soon she is waking up in her girlhood bedroom with the eyes of a vicious killer, just as the Butcher finds himself consumed with all the feelings and life-problems of a teenager trying to make her way in the difficult societal jungle of high school. What starts out as a bloodbath turns into a laugh-out-loud comedy as Vaughn milks the mixup for all its worth, and Millie, with the essence of the Butcher inside her, starts killing off her classmates, with a teacher sliced right down the middle for good measure.

The best bits have Vaughn desperately trying to convince Millie’s friends Nyla (Celeste O’Connor) and Joshua (Misha Osherovich) that he is really she inside. Director Christopher Landon and co-writer Michael Kennedy come up with every variation of this predicament you can imagine and score more hits than misses in the process. The plot thickens when the BFFs take him to a soothsayer, who warns that unless they find a way to reverse the curse in 24 hours, there will be no going back to normal for either of them. At one point, when Millie’s crush Booker (Uriah Shelton) eventually becomes convinced his potential girlfriend is trapped inside the body of the Butcher, there’s a sweetly innocent “romantic” scene and kiss between the two actors that gives the film some nice levels of heart to add to the mayhem — especially what’s in store for the inevitable climax when “Millie/Butcher” runs rampant through homecoming.

Vaughn really gets to show off his comic chops in the role but never loses control of the character. He actually manages to make the teen within fully likable and believable, even in this absurd premise. Conversely, Newton does a great job turning into a teen-girl Jason of sorts, slashing through the school with aplomb. O’Connor and Osherovich are perfect sidekicks, and Shelton keeps it real as Booker. Alan Ruck, Katie Finneran and Dana Drori add some nice support as well.

Make no mistake. Freaky has all the hallmarks of the kinds of low-budget horror items on which Blumhouse has made its name. But this one happens to be delivered with a clever wink-wink that just might make you forget this crazy world if only for a couple of hours. Producer is Jason Blum. Universal releases it in theaters on Friday the 13th. Check out my video review with scenes from the movie at the link above.

Do you plan to see Freaky? Let us know what you think.