Continue to Deadline SKIP AD
You will be redirected back to your article in seconds
Skip to main content
March 3, 2021 3:32pm 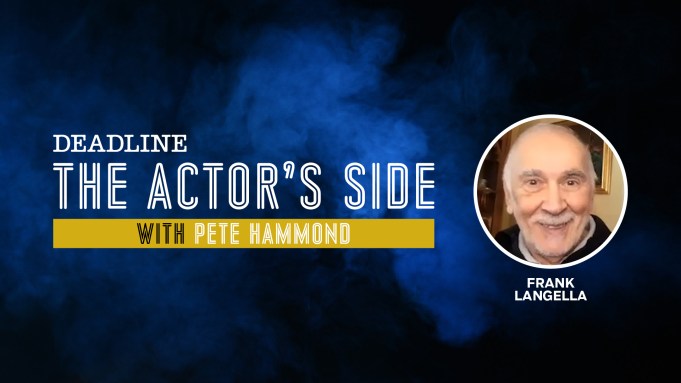 Frank Langella almost literally exploded onto the scene in 1970 with two movie roles that immediately brought him to prominence in Hollywood, Diary of a Mad Housewife and The Twelve Chairs — the latter being the movie Mel Brooks often cites as being his favorite of all he has made. What a start to a film career, and in fact the National Board of Review that year voted him Best Supporting Actor for the combination of the two roles.

It is a remarkable career that continues to this day with his brilliant work as Judge Julius Hoffman in the all-star ensemble of The Trial of the Chicago 7, for which he and the cast are nominated for a SAG Award, and there’s Oscar buzz too, of course. Langella is no stranger to awards: He has four Tonys and was nominated for the Best Actor Oscar for 2008’s Frost/Nixon, for which he memorably re-created his Tony-winning role as the disgraced ex-President Richard Nixon, one of many real-life characters he has taken on.

His most recent Tony came for the Broadway production of The Father (Anthony Hopkins starred in the film version this year), but as Langella told me for this week’s episode of my Deadline video series, The Actor’s Side, his career has been one of ups and downs,  much like a Chekhov play. “I explode and then I implode, explode again and then implode again,” he laughs. But that is the way he likes it, saying every now and then a Dracula comes along or a Nixon or a Judge Julius Hoffman. There actually is a gallery of memorable Langella performances and he recounts some of them in this interview, including how playing Dracula nightly on Broadway gave him a greater appreciation of what it must have been like to be Elvis Presley, a way of explaining the adoration he got from fans at the stage door to the point of hiring a bodyguard. He went on to do the movie version.

We also talk about his book, Dropped Names, in which he recounts his meetings over the decades with iconic people and the impact they had on him. We also talk about his earliest role, that of an elf, in the sixth grade, and how it propelled him into a profession he has always loved. We get his philosophy of acting too: “Know your lines, know what they mean, and mean them when you say them.” For any actor, listening to the full version of this interview (which we provide below) is like taking a master class on acting. Fascinating stuff, and one of my favorites in all the Oscar and Emmy seasons for which I have been conducting these interviews.

Check out the edited version above or the complete conversation below to get the full actor’s side from one of the best, Frank Langella.