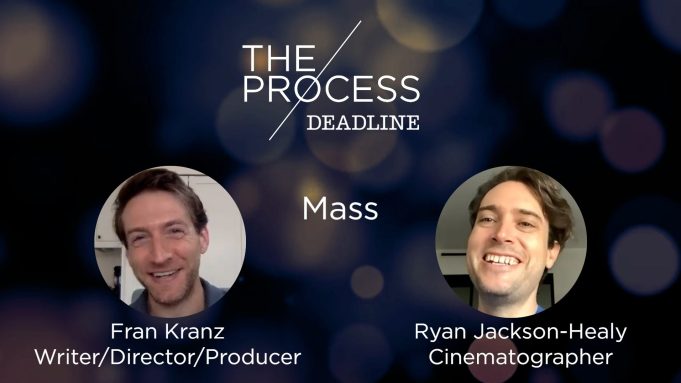 When cinematographer Ryan Jackson-Healy first read the script for Mass, he responded to its willingness to embrace and sit firmly within an entirely uncomfortable conversation.

“I didn’t have any kind of notes really at all,” the DP recalls. “It was difficult, and that’s what I liked about it.”

“[Ryan] said, which we used going forward through this whole process, as a mantra of sorts, ‘Let’s embrace discomfort,'” adds writer-director-producer Fran Kranz. “It’s cool because I know…that I said from the outset, ‘It is an endurance test…It should feel difficult. There should be an exhausting quality to it.'”

The film starring Ann Dowd, Reed Birney, Jason Isaacs and Martha Plimpton watches as the parents of a school shooting victim meet face-to-face with the parents of the perpetrator, in an effort to hash things out and ultimately, to heal. It would be shot almost entirely within the parish hall of a small Boise church over the course of 14 days, with eight of those days going toward one sprawling, 75-minute dialogue scene.

The ambitious drama marks veteran actor Kranz’s feature directorial debut, and while he says that Jackson-Healy taught him “basically everything,” which would later inform his choices—with regard camera equipment, aspect ratios and more—the DP says that this is not necessarily true. “We were pretty early on talking about cameras and aspect ratios and lenses, and I remember you being quite a quick study and really looking at the menu of options,” he shares. “I don’t know if that’s because this is your first movie and you were just really excited about it, but that was exciting on my end, too.”

Kranz says that with his film, he hopes to “create or cultivate a new kind of empathy, a very intense, focused, purposeful sort of empathy with these people.” It was for this reason that he opted not to include “flashbacks or inserts” of the shooting itself in his script, placing the focus entirely on the conversation in its aftermath. “I want to honor what these meetings are in real life, and this whole idea of making this effort to heal and forgive and reconcile, and not find retribution, and not have punishment, this sort of restorative justice theme that is underneath this film,” he says. “To honor that I thought, ‘We have to stay with these people. We have to do the work with them.'”

Mass had its world premiere at the 2021 Sundance Film Festival and was released by Bleecker Street on October 8.

In the first edition of The Process for the 2022 Oscar season, Kranz and Jackson-Healy offer a deep dive into their approach to shooting the film, touching on the “evolving language” they crafted for it, their visual inspirations (including Yasujirō Ozu), the experience of being on set for emotionally devastating scenes, how they navigated the challenges of a fast-paced shoot on a low budget, Kranz’s protection of the film’s nearly two-hour runtime and more.

Check out their conversation above.