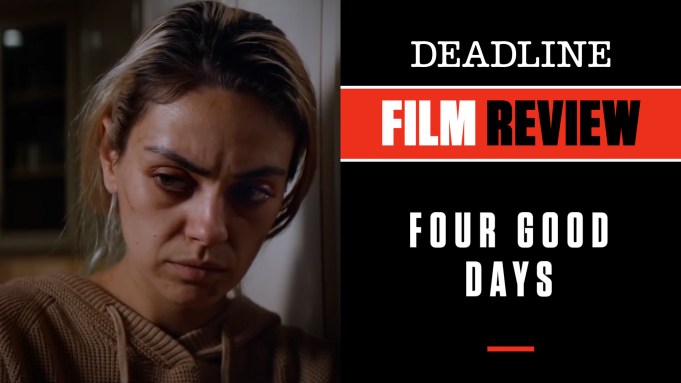 Glenn Close recently received her record eighth Oscar nomination, so far without a win, for her brilliant portrayal of Mamaw in Hillbilly Elegy, a role in which her maternal character must deal with her daughter’s tragic drug addiction. In her new film, Four Good Days, she again is in the same situation, this time at wit’s end in coping with a daughter whose 10-year heroin addiction has torn their relationship apart.

If there is any justice, even though it is very early, Close should be in the running with a ninth nomination for her authentic and heartbreaking turn as Deb, a woman who wants to use tough love on a daughter she has been forced to turn away from but who still holds out for one last chance — just “four good days” — to save her from herself.

Mila Kunis plays Molly, the 31-year-old daughter, a mother of two whose own family now is estranged from her, as is that of her mother and stepfather. Kunis is a revelation in the role, looking gaunt and beaten down by life, a person apparently sent down the rabbit hole of opioid addiction thanks to bad medical advice when still a teen and then hopelessly hooked on needles in any part of her body she can still point them.

It is directed with a firm hand and compassion by Rodrigo Garcia, who previously helmed Close in Nine Lives as well as an Oscar-nominated turn in Albert Nobbs. He also co-wrote the screenplay with Eli Saslow, a Washington Post Pulitzer Prize winner who wrote the article that inspired this story. Although fictionalized, it is based on mother Libby Alexander and daughter Amanda Wendler, who fought their own decade-long battle with Amanda’s heroin use, and perhaps that is a reason all of this feels so authentic. Still, at its heart, this is really a story about familial connection and the magnet that draws parent and child together even in the most difficult of circumstances.

Opening as Molly arrives at Deb’s suburban home and knocks on the door, only to have it shut in her face by her mother, you immediately get a sense of this relationship — fraught with tension right from that beginning. Refusing to believe Molly is serious about getting clean, especially after 13 failed attempts at rehab, Deb slowly comes to give it one more try, perhaps tilting at windmills that this time will be any different than the rest. Close reveals the chasm between them, but still a mother’s love that can’t quite quit.

After a brief stay in the hospital to come down from her latest bout with the drug, and with Deb in tow, a doctor reveals that Molly could be a candidate for a shot that could put her on the path to real recovery, but the hitch is she must remain drug-free for four days or risk a deadly relapse if given the shot while drugs are still in her system. With no bed available to keep her out of trouble in the facility, Deb agrees to let her stay with her and husband Chris (Stephen Root), as every moment of those four days become a nail-biting experience — not so much for Molly but for her mother. It gets really harrowing when Molly persuades Deb to drive her to the house of her supplier under the guise of caring for a friend. That is heavy stuff indeed, but it is only one example of why these four days feel like four years. Yet that scene doesn’t go the way you expect, just one example of why this script does not feel like just another tragic addiction story.

Garcia and Saslow’s scenario, based on extensive research and particularly the way that led to the subjects of Saslow’s compelling article, is never predictable even if it seems like we have seen every possible variation of a drug-addicted person’s life played out onscreen so many times. Keeping the focus not just on the person afflicted but also on the way family can be torn apart, this becomes a universal story that will be easily recognizable and riveting for those who might see themselves in these characters in some ways.

The supporting cast is excellent, but this film belongs squarely to Close and Kunis, who create a kind of family dynamic that reminded me of the one we saw between Shirley MacLaine and Debra Winger in Terms of Endearment, albeit in a different context. A hospital scene with a desperate Deb begging for help for her near-death daughter has similarities to one so brilliantly played by MacLaine as Aurora in that movie. Close similarly ignites the fire within that cuts right to the heart of being a parent, even in such dire circumstances. It is another great moment in a career full of them.

A new song, “Somehow You Do,” penned by Diane Warren and sung by Reba McEntire, adds the perfect touch over the end credits and could put the 12-time Oscar nominee back in the race next year as well.

Producers are Jon Avnet, Jacob Avnet, Marina Grasic and Jai Khanna. The film premiered at the 2020 Sundance Film Festival but finally is getting the distribution it deserves. A must-see. Vertical Entertainment releases it in theaters on April 30 and on digital platforms May 21. Check out my video review with scenes from the movie at the link above.

Do you plan to see Four Good Days? Let us know what you think.