Continue to Deadline SKIP AD
You will be redirected back to your article in seconds
Skip to main content
August 20, 2019 1:46pm 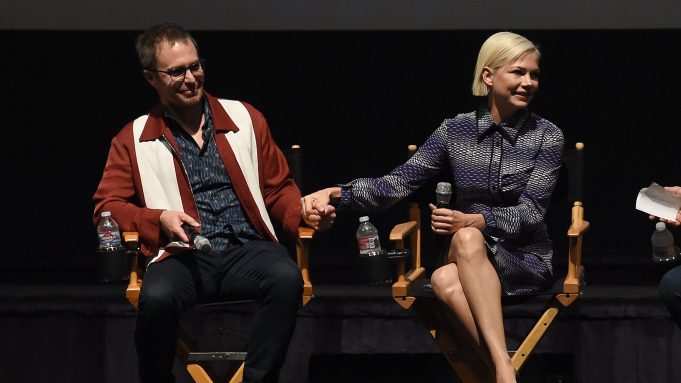 Monday night at the Zanuck Theatre on the Fox lot, Fosse/Verdon stars Sam Rockwell and Michelle Williams shared stories of the making of their brilliant eight-part limited series which has been nominated for a whopping 17 Emmy Awards – and deservedly so – including Lead Actor for Rockwell and Lead Actress for Williams in the Limited Series/Movie category.

After screening episode 7 for the packed house of Television Academy members, my wife Madelyn Hammond and I teamed (for the first time onstage) to have a conversation with these extremely talented performers, who have never worked together before. Rockwell got things off to a roaring star in answering my question about the attraction of committing to a project that would take up seven months of their lives to shoot.

“At first I asked ‘what the f*ck did we get ourselves into?” he said, as Williams added she said yes on the basis of the first script, and only later realized she would be aging several decades during the course of it. In playing the iconic director and choreographer Bob Fosse and his wife and collaborator, Broadway legend Gwen Verdon, the pair knew it would take a lot of research and hard work to do justice to their story, which involved a complex and complicated marriage and relationship that was like no other.

Williams and Rockwell talked about their extensive preparations including dancing together, as well as connecting with the core of this union of what Williams terms as “two perfectionists.” Rockwell says they both bonded on the series because at heart they are both theater nerds themselves.

Among other topics in the half-hour discussion (see the edited version above), Williams talked about the close relationship required with the hair and makeup artists who turned her into Verdon at various ages, and Rockwell into Fosse at various points of hair loss (he shaved his head every day to accommodate the unique Fosse comb-over look). “You have to like them because these people will be touching you all day,” Williams laughed in describing the collaboration with the hair and makeup artists who account for part of Fosse/Verdon’s overall Emmy nom total.

Williams also discusses the extraordinary deal created by FX for this much acclaimed project. To her surprise there was exact equal pay for her and Rockwell, something that doesn’t often happen in an industry that usually financially favors men over women. They were also equals in terms of the actual story (even though it is based on the Sam Wasson biography called simply Fosse), and both have executive producer credits. Williams says she was moved by this, however unexpected, saying it made her try harder because she felt she was a valued and respected member of the team. Both gave props to FX for making it possible, as well as to their director Thomas Kail, who also was a producer along with his Hamilton creative partner Lin-Manuel Miranda who has an executive producer credit.

Deadline sponsored the evening. Watch the video of our conversation by clicking above.